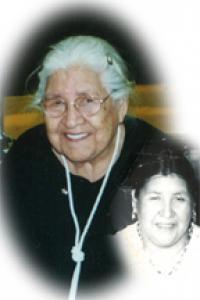 1917 ~ 2014
Our Precious Mother, Grandmother, Auntie and Friend Elizabeth (Betty) Sarah Healy passed away peacefully with her family by her side on Saturday, September 20, 2014 at the age of 97. Betty was the eldest child born to Alice (No Runner) and Willie White Feathers of the Blood Reserve on October 15, 1916. Betty was also the granddaughter of Mary Brown and Nicholas Sheran, the founder of Lethbridge. Mom had a love so deep for her all her children, grandchildren, great grandchildren, great great-grandchildren (5 generations) as well as her late sisters’ children and extended family, it showed through her prayers as she would pray for each and everyone every morning. Mom’s storytelling was shared by her children, grandchildren and leaving each of us with fond memories and her wisdom to carry on. Mom’s humour was something we all loved as you could hear her and family laughing and enjoying special moments, which sometimes would last into the wee hours of the morning. Mom was a very strong woman, whom endured and survived the Indian Residential School and later in life she survived and beat cancer. Mom experienced the transition of the simple but hard life, such hauling water from the river and washing her laundry by hand, and drying and smoking meat up to the time of modern technology, although she never desired to own a cell phone. She is an example of all that is good in this life. \”She loves the Lord and her family and enjoyed the simple things in life. Mom would not want us to be sad, but to be happy for her as she has left behind the pain and sadness and is reunited with her husband and her loved ones. She lived a long life and left behind a great legacy, her children and grandchildren.\” As an honoured and well respected elder of the Blood Reserve and surrounding area, Betty has played an important role in many cultural activities for almost a century. She was more than happy to share the knowledge that she had gained throughout her lifetime and passed them down to the young and old, and for those who made the time to sit and listen. Recently, she was honoured at the Saipoyi Elementary School and she was very happy and excited to be recognized as one of the oldest members of the Blood Reserve. She and her (late) husband, Arthur Healy Sr. inducted numerous noteworthy candidates into the Kainai Chieftainship, whom include Prince Charles, Senator Joyce Fairbairn, Mary J LeMessurier and John Diefenbaker, just to mention a few. Betty along with her husband had the honour of being a part of the Calgary Stampede as Parade Marshals in 1977. Betty received her Patriarchal Blessing on August 27, 1998 in the Church of Jesus Christ of Latter-Day Saints. Betty and Arthur were members of the Horn Society for over 24 years. This has been known to be the longest time that anyone has committed to this sacred society. Betty was also a member of the Motokiis Society for 10 years, also members of the Magpie Society with her husband. The Lady Whip and Headdress was given to her by Rosie Davis which gave Betty the honor to conduct the headdress transfers and numerous other ceremonies. Our family has paid tribute to her long-standing commitment to our traditional ways. Betty is a truly a virtuous woman and worthy of recognition. \”She is not gone but just going over the horizon to the next stage of life\”. Betty is survived by her children: Del (Diane), Jordan, Patsy Healy, Bella (Bert) Mistaken Chief, Sheila Healy, Fern Healy, Lila Heavy Head, Jessalyn (Armand) Page, Robert(Christine) Healy, Heather(Norbert Jr) Black Water, Blair (Milan) Orr, Tanya (Lance) Healy, Sandy (Brad)Healy, Buddy Lane Healy and Kelsey Healy. Her daughters in-law Clara Healy, Rita Tall Man, Gilbert Healy. Adopted Children: Sam Cook, Charlotte Manuel, Trevor Panczak, 52 grandchildren, 140 great grandchildren, and 43 great great-children, as well as numerous nieces and nephews and her extended families; No Runner, Old Shoes, White Feathers, Soop, Weasel Fat, Brown, Mountain Horse, Wadsworth, and Scout. We apologize if we missed or overlooked anyone. Betty was predeceased by her husband Arthur Healy Sr, her children Art Jr, Winston (Loretta), Burton and Terry Healy. Her grandchildren: Kendall, Raphael, Rosanne, Great grandchildren: Daffney, Dimitri, Christi Marie, great great grandson Robby. Her parents Willie and Alice (No Runner) White Feathers, her grandmother Mary Brown (Nicolas Sheran) her sisters Beatrice Weasel Fat and Annie Day Chief, and daughter in law Bernadine Chief Moon, adopted son Bob Gottfriedson, her aunties: Maggie Hinkle, Susie Powell, Helen Cochrane, uncles: Mark Old Shoes, Bob No Runner, Morris Baker and George Coming Singer, as well as numerous relatives. A Wake will be held at 7:00pm on Friday, September 26, 2014 at OLD AGENCY HALL. A Funeral Service will be held at 11:00am on Saturday, September 27, 2014 at OLD AGENCY HALL. Send condolences at www.mbfunerals.com.