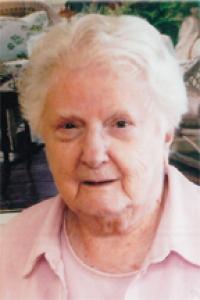 CHRISTINA ELIZABETH JANE MORROW passed away on Sunday, Sept 21, 2014 having joyfully celebrated her 100th birthday on March 22 of this year. She was born in Belfast, Ireland to Thomas and Emma Matilda Yeates Morrow and was the eldest of 8 children. She was predeceased by siblings: Evelyn, Robert, Helen, Ida and Fred and her cousin, Alice McCormack Crawford. She is survived by her 2 sisters, Emma Marshall of Ottawa and her children Sandra and Jeffrey (Julie), and Peggy Campbell of Toronto and her son Donald, sister-in-law, Joan Neighal of Australia, as well as several nieces and nephews. She is also survived by her McCormack Cousins: Mary McCormack Hicks of Ottawa, Pat McCormack Hamilton, and Nancy McCormack Schaalje of Lethbridge. Jane first came to Canada in 1924 at the age of 10 years with her aunt, Maud McCormack. After 3 years in Canada, she returned to her parents in Ireland, but loved Canada so much she was determined to return which she did in 1937 and lived for many years with the McCormack family with whom she was very close. Jane was adept at needlecrafts — embroidery and knitting especially and has knit many items including children’s stuffed toys, afghans and squares for Blankets for Canada. She was an active member of The Church of Jesus Christ of Latter-day Saints since she joined in 1952. In 1959 she was called as a missionary to the British Mission and served in England, Ireland and Scotland. Jane loved to sing and was thrilled to be able to sing in a 200 voice choir at the dedication of a chapel by President David O. McKay. Jane has made Lethbridge her home since 1979 living most recently at Garden View Lodge. Jane will be sadly missed by all the family. Funeral Services will be held on Saturday, September 27 at 11:00 am at The Church of Jesus Christ of Latter-day Saints, LETHBRIDGE EAST STAKE CENTRE, 4105 Forestry Ave. South. Friends may meet with the family from 10:00 am to 10:45 am. Interment in the Magrath Cemetery.