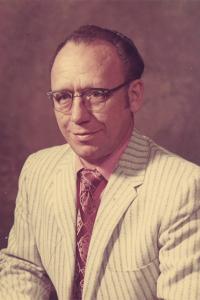 1927 ~ 2014
Uncle Willy, beloved husband of the late Lillian (Darlene) Ferby, passed away peacefully on Friday, September 26, 2014 at the age of 87 years. Willy is welcomed into heaven by his wife Darlene, his sister Stella and his parents John and Ann. Continuing his legacy are his nephews Wally (Dawn) Garrick, Buddy (Hilda) Garrick and his niece Denise (Delbert) Banack; along with their children. He is also survived by his dear friends Janet and Marlene. Willy was born and raised in Lethbridge, Alberta. At the age of 19 years, he followed in his father’s footsteps and joined the CPR and worked as a Diesel Machinist until he retired after 40 years of service. At Willy’s request, no formal service will be held; a private family graveside service will be held at a later date. Send condolences at www.mbfunerals.com.