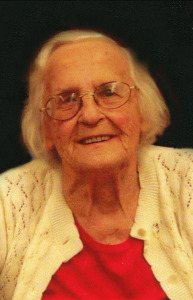 1922 ~ 2014
Mrs. Ann Slemko of Coaldale, beloved wife of the late Mr. John Slemko, passed away peacefully on Friday, October 3, 2014 at the age of 91 years. Ann was born on October 22, 1922 alongside her twin brother, Larry. She was the youngest of seven children and grew up in Mundare, AB. She married John Slemko in July 1939, and together they moved to a farm in Coaldale, which the family still resides on. Ann is survived by her daughter Sharon (Fred) Bobinec; sons David Slemko & Gerry Slemko; grandchildren Dale & Raylene as well as her great-grandchildren Casey & Cameron. She was predeceased by her husband John in 1993 and her son Brian Slemko in 2006. A Prayer Vigil will be held at 7:30pm on Tuesday, October 7, 2014 at ST. AMBROSE ROMAN CATHOLIC CHURCH, 1513-23 Ave., Coaldale, AB. A Memorial Mass will be held at 10:00am on Wednesday, October 8, 2014 at ST. AMBROSE ROMAN CATHOLIC CHURCH, 1513-23 Ave., Coaldale, AB, with Father Newton Rodrigues, celebrating.