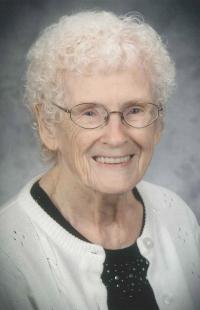 JEAN C. ROBERTS passed away in Cardston on Sunday, October 5, 2014 at the age of 89 years, beloved wife of the late Gordon H. Roberts. Jean was born on March 5, 1925 in Lower Millstream, Kings County, New Brunswick and was raised there. After completing high school in Sussex, she went on to attend nursing school in Saint John where she graduated as a registered nurse in 1946. While in training, she met her future husband, Gordon, who was in the Navy, stationed in Saint John during the Second World War. They were married on May 15, 1948 and soon after settled in Lethbridge, Alberta, where she worked as a nurse at St. Michael’s and the Lethbridge Regional Hospital over the years. They started raising their family in Lethbridge and then moved to Stettler, where they lived for the next 13 years, then onto Black Diamond, living on a dairy farm, before returning to Lethbridge. After the passing of Gordon, she moved to Cardston to be closer to her family. Jean gave a lifetime of service to her family and friends. She was an avid quilter, knitter and a gifted seamstress. Her family benefitted from her talents and she devoted many loving hours to creating treasured quilts for her children and grandchildren. She served a Family History mission in Salt Lake City with her husband and enjoyed serving in the Temple for many years. Jean is survived by Ray (Carole) Roberts, formerly of Lethbridge, and currently Cardston, Judy (Ralph) Salmon of Cardston, Terry (Marianne) Roberts of Atlanta, Cathy (John) Schaffer of Cardston and Robyn (Mark) Jones of Dallas; 27 grandchildren, 76 great grandchildren; 4 siblings, Inez McMann, Hope Brown, John Walker of New Brunswick and June Cameron of Prince Edward Island. In Gordon’s family, she is survived by Sheila (Don) MacLennan, Mary Pat Roberts and Margaret Henderson Roberts. She was predeceased by her husband Gordon in 1994 and grandson Jordan Roberts.The Funeral Service will be held in The Church of Jesus Christ of Latter-day Saints, Cardston Alberta West Stake Center (Waterton Hi-way) on Friday, October 10th, 2014 at 11:00 a.m. with Bishop Kendall Hardy officiating. Friends may meet the family at the Church from 10:00 to 10:45 a.m. prior to the Service. Interment in the Temple Hill Cemetery, Raymond, Alberta. E-mail your condolences to: legacycardston@gmail.com.