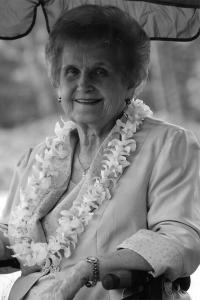 Mrs. Helen Thiessen of Lethbridge Alberta, beloved wife of the late John Thiessen passed away on Wednesday, October 8, 2014 at the Chinook Regional Hospital at the age of 84 years. Helen was born on November 12, 1929 in Coleman Alberta. Helen is survived by her daughter Marlene (Warren) Fox of Coquitlam and their sons, Robert Fox of Coquitlam and Peter Fox (Krystina) of Pitt Meadows, BC. She is also survived by her brother-in-law Abe (Tena) Thiessen of Coaldale, Henry (Margon) of Edmonton, Arnold (Peggy) Thiessen also of Edmonton, and sister-in-law Heidi (Robert) Dawson of Calgary and numerous nieces, nephews, cousins and extended family. Beside her loving husband John, Helen was predeceased by her parents, her in-laws, brother, sister, 2 sister-in-laws and 1 brother-in-law. At Helen’s request, there will be no funeral service. In lieu of flowers you may make a donation to the Arthritis society.