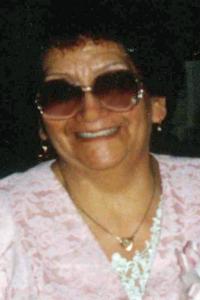 Sept. 10, 1937 – Oct. 18, 2014
SYBIL SHIRLEY MOUNTAIN HORSE (Pistsikaakii), of the Blood Reserve, passed away peacefully on Saturday October 18, 2014 in Cardston, Alberta at her place of care for the past two and a half years, the continuing care home, Good Samaritans. In celebration of Shirley’s life, her legacy and memory will live on through her children: Delores (Peter) Weasel Moccasin, Brent (Mavis) Singer, Alvine (Narcisse) Mountain Horse, Ivan (Kailey) Singer, Carolyn, Ray (Beverly) Mountain Horse, Marvin, and daughter-in-law Roana (Darcy) Weasel Head; her grandchildren; great grandchildren; her siblings; Theresa Mistaken Chief, Carla (Bruce) Wells, Jerry Wells, Nina Buckskin, Yvonne Morning Bird, Gordon Morning Bird, Bernard Shouting; her sisters-in-law Mary Singer and Adeline Singer; numerous nieces and nephews.Shirley was born on September 10, 1937 to Aahkiaapikkitstaakii (Annie Mountain Horse). Shirley’s formal western education began at the age of 8 years old at the St. Paul’s Anglican Residential School until the age of 14 years of age. She had a very traditional upbringing, as her mother was very involved in the traditional societies of the Blackfoot people and the annual Sundance encampment held at the Belly Buttes every summer. Shirley’s mother was a very long time member of the Maoto’kiiksi (Buffalo Women society) and she was a herbalist from whom Shirley acquired her own knowledge as a herbalist. Her mother transferred on a lot of her herbal medicine knowledge that Shirley used to help/treat a lot of people that were sick and that would rather have herbal medicine instead of pharmaceutical medicine prescribed to them by a doctor. She was able to share some of that knowledge of the herbs and plants when she participated in the acclaimed website project, “Nitsitapiisinni — Stories and Spaces: Exploring Kainai Plants and Culture” with the Galileo Educational Network at the University of Calgary, in partnership with Red Crow College, and Kainai Board of Education. The website was launched on May 27, 2005. Besides having the knowledge of the plants and the herbs, Shirley was given other Blackfoot traditional transfer rights like; making the blood soup at the kano’tsissin (all night smoke ceremonies) and fixing ochre to make/cook it to the right texture/color. She was the tripod owner for the Ninaimskaoh bundle “Aistsiisihtsi”. She was a very skilled bead worker and seamstress while never owning a sewing machine when her children were still very young she sewed their clothes by hand. She was also a very talented cook one of the skills she picked up during her time at the residential school. Some of the many skills and talents that Shirley passed on to her children. Shirley was predeceased by her mother, Annie Mountain Horse; her father Jimmy Wells Sr.; her infant son Charles Singer; her son Michael Mountain Horse; husband Reid Singer; her son-in-law Michael Andrew “Binky” Weasel Fat; her mother-in-law Antoinette Singer; her brothers-in-law: Walter Singer, Lambert Singer, John Singer, Clarence Singer, Billy Singer, and Frederic Heavy Runner; her special sister-in-law Agnes (Harry) Shade; her brothers: Wallace Mountain Horse, Jimmy Wells Jr., Edwin Wells, Jordan Wells, and Nap Black Rabbit; her sisters: Florence Brave Rock, Shirley Calf Robe, Anna Wells, and Joan Wells. Shirley comes from a very large extended family and relatives, which include the families of the Crow Chiefs, Day Chiefs, No Runners, Healys, Old Shoes, Kings, Heavy Heads, White Feathers, Singers, Shades, Willows, Tallows, Small Eyes and we apologize if any families were missed as this was not intentional. A Wake service will be at the Senator Gladstone Hall, Blood Reserve on Thursday, October 23rd from 7:00 to 11:00 p.m. The Funeral Service will be held at the Senator Gladstone Hall, Blood Reserve on Friday, October 24th at 1:00 p.m. Interment in St. Catherine’s Cemetery, Blood Reserve. Email condolences to: legacycardston@gmail.com.