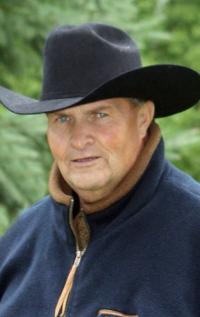 NORMAN CLEAVEY NEWBERRY was born February 21, 1951 in Kamloops BC to Robert and Elva Newberry and they resided in Barrier BC. Norman helped at the family sawmill as a young man and the family took great pride in raising and showing horses through 4H and various horse clubs. In 1972 the family decided to take on ranching after the sawmill sold and they purchased the -S- Ranch on Big Bar Road north of Clinton BC. Norman\’s classroom became the open range where he helped manage a large mother/cow herd of cattle and expanded the horse rearing operation. Norman met Terry Crawford in November 1977 and they were married in January 1978. They resided at Big Bar until the ranch was traded for property at Anaheim Lake. They moved to the 17 Mile Ranch, north of Cache Creek, BC and began to raise some of their own horses. They spent many hours transporting their younger siblings to horse shows and rodeos. They decided to start their own family having two sons, Jake (1980) and Justin (1981). There was never a prouder father. Norman worked at the Semlin Ranch and later the Perry Ranch. In 1992 after a poor year for agriculture and logging, there was a decision made to move to Picture Butte AB. He worked for Haney Farms, later moved to Butte Grain Merchants at the Turin Feedlot and then Lost Lake Feed yards. His strong work ethic and great pride in doing the best he could earned him respect in the feedlot industry. He was forced into early retirement in 2008 due to mobility issues and it made him more determined to get well. He could be seen walking daily in Picture Butte, even after his initial radiation and chemo treatment. He always loved to visit the local feedlots and farms to keep up on the \”farm gossip\”. In his retirement he and Terry spent lots of time in their 5th wheel visiting family and friends. He still spoke fondly of the trip to Alaska and the Yukon. He learned to relax and live a more leisurely lifestyle. He is lovingly remembered by his wife Terry, sons Jake (Julia) and Justin (Scott), three grandchildren (Gwenyth, Scarlett, Tucker), two brothers Peter (Connee) and Kevin (Bonnie), two sisters Bernice (Trevor) and Deanna (Gary), sisters-in-law Judy, Bonnie (Brad), Joan (Randy), two brothers-in-law, Dennis and Lester and numerous nieces and nephews. He was predeceased by parents Bob and Elva and two brothers Laurie and Dale. In Celebration of Norman\’s Life, an Open House will be held at the CORNERSTONE COMMUNITY EVANGELICAL FREE CHURCH HALL – 440 CRESCENT AVENUE, PICTURE BUTTE, AB., on Saturday, November 1, 2014 from 1:00-3:00 PM.