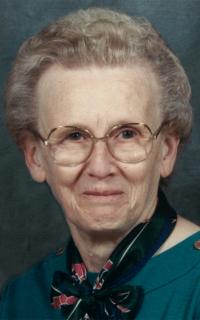 1921 — 2014
Mary Gossen (nee Ens) passed away peacefully at Legacy Lodge in Lethbridge on Nov. 14. She was born in Felsenbach Maripol, Ekaterinaslav, Russia but lived for most of her life in Coaldale after coming to Canada in the summer of 1927 with her parents, Abram and Maria Ens. Mary was the oldest of nine children. She began working as a housekeeper at the age of 14 to help support the family. She married John Gossen in 1947 and they raised eight sons. They co-owned Coaldale Insurance and Real Estate from 1956 to 1970. Mary was a devout member of the Coaldale Mennonite Church and a member of the church’s Sunbeam Sewing Circle for many years. She also enjoyed singing with one of the church’s choirs and volunteered at the Coaldale Hospital tuck shop, Mennonite Thrift Store and a local chapter of Gideon Bible Society. In 1994, the Coaldale Senior Citizens Centre named John and Mary Gossen Mr. and Mrs. Coaldale Seniors and Sweethearts of the Year. Mary was also renowned among her acquaintances for her baking. Mary was predeceased by her husband and is survived by sons Richard (Anne), Donald (Pauline), Douglas, Robert (Lindamarie), David (Kayoko), Raymond (Mika), Linden (Lynette) and Edward (Monique); grandchildren Kristin, Alayne, Sara, Mikail, Robyn, Anna, Liam, Hana, Kai and Ema; and siblings Abe, Henry, Jake, David and Lena. She is predeceased by siblings Nettie, Margaret and George. Internment will take place at 1:00pm on Thursday, November 20, 2014 at the COALDALE MENNONITE CEMETERY for close family only. A Memorial service will be held at 2:00pm on Thursday, November 20, 2014 the COALDALE MENNONITE CHURCH, 2316 17 Street, Coaldale, with Pastor Lillian Thompson, officiating. In lieu of flowers, please make a donation to MCC (Mennonite Central Committee) Alberta, #219, 2946-32 Street N.E. Calgary, Alberta T1Y 6J7. Send condolences at www.mbfunerals.com.