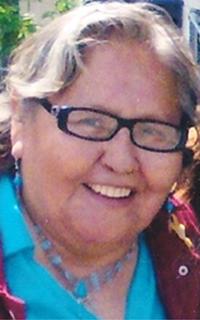 O’takapinaakii" (Round Eyes)
November 20, 1949 – November 14, 2014
It is with great sadness that we announce the passing of our sister, mother, auntie, grandmother, great-grandmother, and friend Clara. She passed away peacefully in her home at the age of 64.Clara was born to the late Alex Sr. & Susie Hunt in Cardston, Alberta. She attended St. Paul’s Residential school where she later met her first love Francis Red Crow wtih whom she had their three daughters. After his passing she then attended Lethbridge College to further her education. Once completed, she enrolled with the Health Care Institute of Learning and graduated with her Personal Care Attendant Certificate where she later went on to work with Grey stokes. During this time she met the love of her life Francis Zugo who she later married. They resided in Lethbridge until his passing where they raised their grandchildren together. Grandma was an avid home maker she enjoyed sewing, beading, crocheting, embroidering, and liked attending every powwow she could. She was very proud of her spirituality and cultural background. Clara loved to Sundance; she danced for 10 years with the North-End Sun dancer’s. She always made an effort to attend all the sweats and night lodges to pray for her family and friends. Clara was a 17 year survivor of Breast Cancer. She wanted to help bring awareness and a positive message to all those who were fighting cancer. She had no trouble recalling how she felt when she got her diagnosis. After a 6 month period of surgery, radiation, and chemotherapy she overcame the cancer and took it upon herself to help find a cure. In October, 2007 Clara spearheaded an annual fundraiser called "Celebration of Cancer Survivorship", with the help of her siblings, to raise money and awareness on the Blood Reserve. She took great pride from the outcome of the support that came from the community. She was very grateful to everyone who helped and supported her in her cause. Her message was "I would like the people to open their eyes and keep on fighting for their lives. It’s a tough road but we have to keep fighting". Clara has left behind her daughters Pearline, Lisa, and Raecine, and her son Louis, her grandchildren Anh, Binh, Keith, Carmen (Fabian), Illdiko, Minh, Martina, Lucas, Jolissa, Sunshine, and Montana and her great grandchildren Kellita, Alia, Azarah, Karter, Kasey Jr, Daylin, and Kalaya. She has also leaves behind her sibilings Alex Jr. (Bernice), Pat, Albert (Elizabeth), Roger (Katherine), Robert, Gabriel, Wilbert, Della, Nora, Regina, Darlene, adopted brother Stewart Weasel Moccasin and adopted sister’s Ada Red Crow & Wilma Vielle, as well as numerous nieces and nephews. She was predeceased by her siblings Willy Hunt Sr. Veronica Hunt, and Marina Hunt daughter Irene Day Chief and grandchildren Jolie, Barbara, and Linda. The Wake Service will be held at St. Paul’s Anglican Church, Blood Reserve, Alberta on Thursday, November 20, 2014 from 7:00-11:00 p.m. The Funeral Service will be held at St. Paul’s Anglican Church on Friday, November 21st, 2014 at 11:00 a.m. Those who desire may donate to the Canadian Cancer Society in her honour.Email condolences to: legacycardston@gmail.com

One Condolence for “ZUGO Clara”