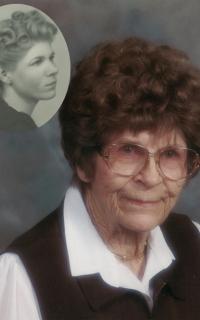 1919 ~ 2014
Helen Thelma Dunsmore of Lethbridge, beloved wife of the late George Harris Dunsmore, passed away peacefully at her home at the Legacy Lodge, Saturday, November 22, 2014 at the age of 95 with family at her side. A dearly loved Mother, Grandmother, Great-Grandmother, and Aunt, Helen was born at home near Brock, Saskatchewan April 25, 1919, the fifth of eight children. Helen, her mother and siblings moved to Alberta around 1940. In 1950 Helen married her husband George, and they had two children together. Helen is survived by her two children, Eugene (Judy) Dunsmore of Enchant, and Faye Dunsmore of Lethbridge; four grandchildren, Tracy (Jessica) Dunsmore of Swift Current, Steven (Kim) Dunsmore of Enchant, Craig (Bobbie) Dunsmore of Coaldale, and Meghan Dunsmore of Lethbridge; and six great-grandchildren, Pierce, Jadyn & Tyra Dunsmore of Enchant, Joline and Paxton Dunsmore of Swift Current, and Mikayla Dunsmore of Coaldale; one sister-in-law, Jessie Dunsmore of Innisfail, and numerous nieces, nephews and their families. Besides her beloved husband, George, Helen was predeceased by her parents Hattie & Taulo Skrove, seven siblings, nine brothers-in-law, seven sisters-in-law and several nieces and nephews. For Helen, family was the center of her world and there was no effort she would not make for someone she considered her family, whether they were related or not. She loved to gather family and friends together for a meal, a cup of coffee, and a good visit. A woman of unwavering faith, Helen spent many hours studying her bible and seeking God’s wisdom. She was also a very talented woman who could do anything she set her mind to, and enjoyed sewing, quilting, crocheting and many other crafts; cooking, baking, raising chickens, turkeys and geese, growing a bountiful garden, and the most beautiful flowers. She made the best lefse and gave most of it away. Helen had great wit, and she loved to tease and joke and laugh with everyone. Family and friends are invited to pay their respects between 7:00 and 8:00 p.m. on Tuesday, November 25 at MARTIN BROTHERS RIVERVIEW CHAPEL, 610 4 St S, Lethbridge, AB. A Funeral Service will be held at 11:00 a.m. on Wednesday, November 26, 2014 at MARTIN BROTHERS RIVERVIEW CHAPEL, 610-4 St. S., Lethbridge, AB, with Pastor Jeff Frostad, officiating. Immediately following the service, a lunch will be held at Martin Brothers. Interment will then follow in the Enchant Cemetery. In lieu of flowers, the family encourages everyone to make a donation to the charity of their choice. Send condolences at www.mbfunerals.com.

One Condolence for “DUNSMORE Helen”