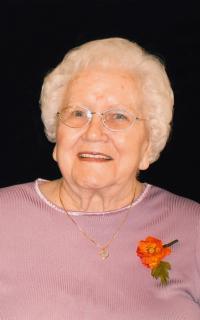 1924 — 2014
MARY VIVIAN (GARNER) BAKER, beloved wife of the late Wallace Richards Baker, passed peacefully on November 23, 2014 at the age of 89 years. She will be missed by her children: Grant (Hazel), Jolaine (Jim — deceased) McLaughlin both of Calgary, Ruth (Larry) Nilsson of Stirling, Glen (Judy) of Lethbridge, and Mark (Janice) of Pentiction, and her 16 grandchildren and 40 great grandchildren. She is also survived by her brother Lyman Garner and sisters Fanny Fletcher and Ruth Gibson. Born in Cardston, Alberta on December 19, 1924, Mom was raised on the family farm in Hillspring. It was in these formative years that she learned the value of hard work and became aware of her many talents. She married Wallace Richards Baker in 1944 and they eventually settled in the Wrentham area where they raised their family before retiring to Magrath. Throughout these years, she continued to develop those talents by using them to serve, not only her family, but all those with whom she came in contact. Since Dad’s passing in 2005, Mom has lived at the Good Samaritan Society West Highland Centre located in Lethbridge. Here she received exceptional care from compassionate caregivers for which the family is most grateful. The Funeral Service will be held on Saturday, November 29, 2014 at 11:00 a.m. at The Church of Jesus Christ of Latter-day Saints, LETHBRIDGE WEST STAKE CENTRE, 560 Highlands Blvd. W, Lethbridge. Friends may meet the family prior to the service at the church from 10:00 to 10:45 a.m. Interment in the Magrath Cemetery following the service.

One Condolence for “BAKER Mary”