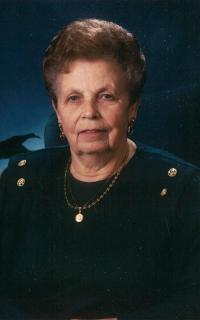 1921 ~ 2014
Mrs. Anaztazia Opyr of Lethbridge, beloved wife of the late Mr. Paul Opyr, passed away peacefully on Thursday, November 27, 2014 at the age of 93 years. Anaztazia was born on January 13, 1921 in Chorna Village in Sianik, Galicia, Ukraine. In 1942 she was taken to work in Germany until the end of the war. After the war she was placed in a refugee camp where she met her husband Paul. Anaztazia and Paul were married in 1947 in Germany. Anaztazia immigrated to Canada in 1948 and started working at the Galt Hospital. Paul joined her in 1949. Anaztazia was later transferred to the Auxiliary Hospital where she worked until she retired in 1987. Anaztazia enjoyed gardening, baking and Ukrainian embroidery. She also loved to travel back to her home land to visit her family in Ukraine and France. Most important to her was the time she got to spend here with her own children, grandchildren and great-grandchildren. Anaztazia is survived by her son Zenko (Mary) and their children Chantelle (Zach) (children Xavier and Wyatt), and Michael; son Ron (Patricia) and their son Joshua; and grandson Christopher (daughter Natalie’s son). Besides her beloved husband Paul, Anaztazia was predeceased by her daughter Natalie as well as three brothers and seven sisters. A Funeral \”Parastasis\” will be held at 7:00 PM on Thursday, December 4, 2014 at SS. PETER & PAUL UKRAINIAN GREEK CATHOLIC CHURCH, 643 — 12 \”B\” Street North, Lethbridge, led by Father Mark Bayrock. A Funeral \”Divine Liturgy\” will be held at 10:00 AM on Friday, December 5, 2014 at SS. PETER & PAUL UKRAINIAN GREEK CATHOLIC CHURCH, with Father Gary Sedgwick celebrant. Interment to follow at Mountain View Cemetery. Flowers are gratefully declined. Those who wish may make memorial donations to a charity of one’s choice. Send condolences at www.mbfunerals.com.