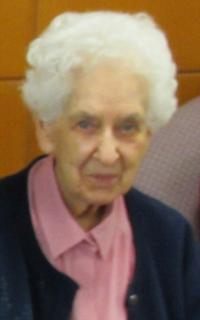 Steele: Sister Florence, 87, formerly Sister Anne Michael, a Sister of St. Martha of Antigonish, died at Bethany, Motherhouse on Friday, November 28, 2014. She was in the 67th year of her religious life. Born in Dominion, NS, Sister Florence was one of ten children of the late Michael and Mary Anne (Sutherland) Steele. She entered the Congregation of the Sisters of St. Martha in 1945 and made perpetual profession of vows in 1950. Prior to entering the Congregation, Sister Florence did office work in the family business following studies at Empire Business College, Sydney. Her main academic achievements include: a Certificate in Hospital Purchasing from the Catholic Hospital Association (1965), Business Administration Diploma from St. Francis Xavier University (1970), a Teaching Certificate in Business Administration (1975) and a Bachelor of Education from the University of New Brunswick (1977). Following profession of vows, Sister Florence served in a variety of capacities within the field of office management, these included: secretarial, administration, bursar, and business manager. Sister Florence spent considerable time serving the people of the West (approximately 16 years) in Mineral Springs Hospital, Banff, AB, St. Michael’s Hospitals, both in Lethbridge, AB, and Broadview, SK. In the East, she served at St. Rita Hospital, Sydney. For seven years, sister was bursar at St. Augustine’s Seminary, Toronto and for four years was Chancellor for the Diocese of Antigonish. Her volunteer work included: New Waterford Consolidated Hospital, New Waterford, R.K. MacDonald Nursing Home, Antigonish, Diocesan Religious Education Office, Sydney. Following her return to Bethany and until her retirement, Sister Florence served as Purchasing Agent at Bethany. In Banff, fascinated by the mountains, Sister Florence could be found venturing out in the early morning hours for a hike while seeking to capture with her camera the ever new glimpses of the rising sun over the snow capped mountains. Sister Florence is survived by one brother, Joseph (Boston) and two sisters, Theresa (Glace Bay) and Genevieve (Dominion). Sister Florence was predeceased by four brothers, Angus, Dan, Dr. Bernie and Rev. Harvey and two sisters, Evelyn and Mary Catherine (Mae). The remains will be resting at Bethany, beginning Tuesday, December 2, at 1:15 p.m. A Celebration of Vigil will be held on the same evening at 7:30 p.m. Liturgy of Christian Burial will take place on Wednesday, December 3 at 2:00 p.m. in Bethany Chapel. Arrangements are under the direction of Curry’s Funeral Home of Antigonish. Sister Florence, baptized Florence Teresa, was born on January 26, 1927, in Dominion, Nova Scotia. Her father, Michael Steele, was born in Beechmont, NS, and her mother, Mary Anne (Sutherland) Steele, was born in Soldier’s Cove, NS.

One Condolence for “STEELE Florence”