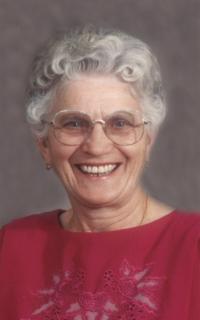 1923 ~ 2014
Jenny Najda passed away peacefully on Friday, December 5, 2014. Born Genowefa Bozecka in the small village of Mieroniece, Poland on July 12, 1923 to Ignacy and Franceska Bozecki. She resided with her parents, brothers Stephen, Edward, Peter and her sister Mary until the age of sixteen when at the outbreak of the Second World War she was forcibly removed from her home and taken to work as a laborer in Germany. Her time during the war was marked with both overwhelming hardships and extreme happiness. While she suffered the harsh indignities of the war, she was equally blessed to have found lifelong friendships. Mom immigrated to Canada in 1947, which proved to be one of the best decisions in her life. After landing in Halifax, she traveled to Lethbridge with several other Polish women to their new home at St. Michael’s General Hospital where they worked as uncertified nursing aides. Shortly after her arrival in Lethbridge, mom met the love of her life, Marian Najda, whom after a whirlwind courtship, she married on their third date. Mom and Dad endured many hardships during their early years, working sugar beets together throughout southern Alberta while trying to raise a young family. They settled in Lethbridge in 1951 where they built the house that they resided in until Dad’s passing in 2006 and where their family was raised. Mom worked throughout her marriage as a nursing aide starting out at St. Michael’s, then moving to the Galt Hospital and finally finishing out her career at the Auxiliary. She was passionate about all things in her life, and proved to be a fiercely proud and determined lady. She embodied the independent free thinking woman long before it became fashionable, and by example taught the virtues of strength and independence simply by living her life. Her retirement years were spent fishing and camping with Dad, cooking huge and delicious meals for the family, and volunteering for community groups too numerous to mention. And of course, there was always BINGO. It was often thought that her real career was playing BINGO, as she was a well known fixture at \”Lucky’s\” Bingo Hall. After some 50 years of trying to win the \”Big One\”, she finally won the Satellite Bingo, which she never let anyone forget! Jenny especially enjoyed her grandchildren, and was the consummate grandmother, spoiling each and every one of them in her own special way. Her loving and generous nature will always be a cherished memory of her grandchildren. She will be lovingly remembered by her family for her wonderful sense of humor and her laugh that would, and did, light up our lives. Jenny was predeceased by her husband and \”sweetheart\” of 58 years, Marian; her eldest grandson, Larry Tamaki Jr. She is survived by her children Henry (Debbie) Najda and their son Nathan Najda (Steph), Linda Tamaki and her children Jody (Mike) Pontillo & Travis Tamaki (Allison), and Joanne (Jim) Parkinson and their children, Matthew Parkinson & Nick (Chantal) Parkinson, and their daughters Reese & Taylor. The family wishes to extend a heartfelt thank you to the administration and staff of Extendicare. We will be forever grateful for the care and compassion they showed Jenny and our family. Their efforts made her last few years comfortable and happy, and she truly enjoyed being part of their community. A Memorial Service will be held at 1:00pm on Friday, December 12, 2014 at ST. BASIL’S CATHOLIC CHURCH, 604-13 St. N., Lethbridge, AB, with Father Nathan Siray, officiating. Send condolences at www.mbfunerals.com.