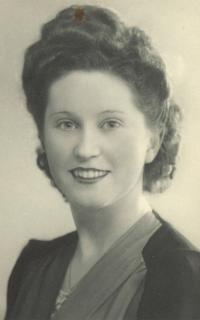 1921 ~ 2014
Rita Minnie Lewis of Lethbridge, beloved wife of the late Arthur Donald Lewis, passed away peacefully on Saturday, December 13, 2014 at the Chinook Regional Hospital at the age of 93 years, with her family by her side. Rita was born in Exeter, England on October 3, 1921. She married Arthur on March 31, 1945 and came to Canada shortly after as a war bride. Rita leaves to treasure her memory, her daughter Lorraine (Randy) Morgan; son Donald Lewis; grandchildren Michael (Michelle) Morgan and Carolyn (Jonathan) Morgan; sister Margaret in England; and her good friends Anne and Georgina. Besides her loving husband Arthur, Rita was predeceased by her parents, 1 brother and 3 sisters. At Rita’s request there will be a private family service. In lieu of flowers, memorial donations may be made to a charity of one’s choice. Send condolences at www.mbfunerals.com