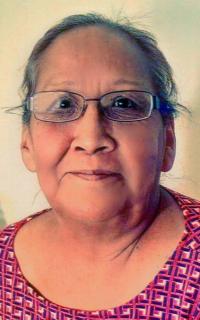 MARY RITA HEALY nee SPEAR CHIEF-Iisstsain’ski, beloved wife of the late Grant James Healy, was called home to be with our Creator on Sunday, December 28th, 2014. Mary Rita was born on May 26, 1952 to the late Allen and Isabel Spear Chief of the Blood Reserve. Rita, along with eight sisters and two brothers, was raised on a small farm on the Blood Reserve. Rita, at a very young age, developed a love for reading;she often carried a big hard-covered book around with her. In this, she would also carry a dictionary, to look up and pronounce any difficult words she came across. Rita was usually seen reading her books whileeither sitting behind the house in the shade, in Dads tool shop, or out in the field. Rita’s great love for reading would carry on for the rest of her life; everyday she engaged in reading anything from science to world history to culture. Rita received part of her education at the St. Mary’s Residential school on the Blood Reserve. She went on to continue at St. Francis Junior High and Catholic Central High in Lethbridge, AB, where she graduated. Following this, Rita went on to be employed with Petro Canada in Calgary, AB, for many years. As well, she was employed with Nova Corporation in Edmonton, AB, as well as with the Blood Tribe Administration on the Blood Reserve.In her work experience, Rita favoured and excelled at clerical/administrative work. In 1971, Rita gave birth to her one and only child, Stephanie Spear Chief. From 1990 to 1992, Rita would welcome three grandchildren; and this past April 2014, Rita was very proud to become a great-grandmother to Nevaeh Dawn. In her last few months, Rita spoiled Nevaeh with gifts and love, and often she spoke of how she wanted to provide only the best for her great-grandbaby. Rita had many things that she loved, but one of her greatest loves was animals; in particular, Rita loved cats from when she was a child, up until she was called home. Most recently, Rita was a loving owner to two cats namedSweety and Buddy.In addition, Rita was also a proud owner to her precious dog, Molly. Rita spent much of her last days paying close attention to the well-being of Sweety, Molly and Buddy. She loved her pets so much that when Molly gave birth to a handicapped puppy, she provided 24-hr care to it in attempt to keep it alive. In 1994, Rita returned home to live with Mom after Dad passed away. At home, she spent her days helping mom on the farm, especially when it came to mom’s cattle and orphan calves. Rita was very passionate about the orphans, which led her to take a veterinary course at the Lethbridge Community College. In this, she saved mom a lot on vet fees. In addition to farm work, Rita frequently assisted mom as a foster parent by providing care to many of her nieces and nephews. In 1992, Rita met and married the love of her life, Grant Healy. They would spend the nexttwenty years together before his passing on December 19, 2012. During the last years of her life, Rita spent the majority of her time with family, especiallywith her grandchildren, who took turns living with her in Lethbridge. In her home, Rita relied on family for company as well as for assistance around the house. As she enjoyed being home, Rita loved making plans for the next family dinner or working on home décor ideas.Rita, from a young age, took great pride in her appearance; as she carried this belief throughout her life, she often strived for perfection within her home. Besides her loving daughter, Stephanie (Keith Jr.). Rita is also survived by three grandchildren; Starly (Wade), Letisha (Marty), and J Nolan (Melissa); one great granddaughter, Neveah; and one adopted granddaughter Keanna. Rita is survived by her sisters and brothers; Gertrude (Tom), Monica (Adolph), Alma (Martin), Emma (Leonard), Gloria, Margaret (Bill), Carolyn (Kevin), Melvin (Merle) and Kelvin; as well as by numerous Nieces and Nephews. Rita is survived by Auntie, Lena Brown Chief Calf; ex sister in law Betty Spear Chief; as well as numerous cousins. Rita was predeceased by her husband Grant Healy (2012); Parents, Allen (1994) and Isabel (2013) Spear Chief; sister Lenora Ann Sinclair (2010); an infant brother (1966); nephews, Gilbert Spear Chief (1995) and Leslie Frederick Buckskin Jr (2004); and nieces, Janis Spear Chief (2003), Sasha Spear Chief (2000), Genie Spear Chief (2012), Crystal Taypotat (2013), Shania Black Star/Scout (2014), Makai Shade (2006), Kaydence Black Star/Scout (2008), and Kyra Spear Chief (1998). Rita, from childhood to adulthood, lived life to the fullest. Rita’s stories, intelligent wit, and generosity will be greatly missed by all that knew her. However, she will continue to live on with the beautiful memories she left with her children and family. A Wake Service will be held at the Senator Gladstone Hall, Blood Reserve on Tuesday, January 6th from 7:00 to 11:00 p.m. The Funeral Mass will be held at St. Mary’s Catholic Church, Blood Reserve on Wednesday, January 7th at 11:00 a.m. Interment in St. Paul’s Cemetery, Blood Reserve. Email condolences to: legacycardston@gmail.com.