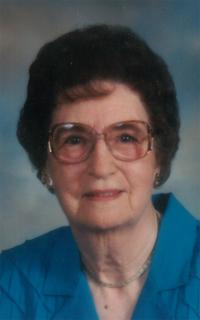 1914 ~ 2014
Mrs. Mavis Standing of Lethbridge, beloved wife of the late Mr. Herbert John \”Bert\” Standing, passed away on December 31, 2014 at the age of 100 years. She was predeceased by her parents Barbara and Charles Harding, her husband Herbert John \”Bert\”, and her oldest son Fredrick Lawrence. Mavis is survived by her son Donald Herbert (Janet) and many grandchildren, great-grandchildren, great-great-grandchildren, nieces, nephews and their families. Mavis is also survived by Fredrick’s children, grandchildren, and great- grandchildren and their families. Mavis was born in Lethbridge and lived all her life there. She was actively involved with her churches missionary program. In 1958 she became involved with the Civil Defense Organization. Her hobbies were reading, knitting and visiting with family and friends. A Funeral Service will be held at 10:00 am on Saturday, January 10, 2015 at MARTIN BROTHERS RIVERVIEW CHAPEL, 610 — 4 Street South, Lethbridge, with Pastor Mark Noonan, officiating. Interment will be held in the Mountain View Cemetery. Send condolences at www.mbfunerals.com.