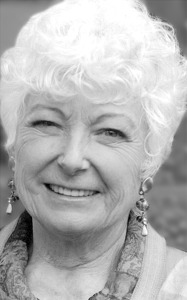 November 11, 1927 – December 31, 2014
Loving, brave, generous and with a sharp wit, Irene Virtue was known for her indomitable spirit and enthusiasm. She lived a full and engaging 87 years. She died peacefully and with grace, surrounded by her family. Irene’s pragmatism was ideally suited to nursing. She completed her B.Sc. at U of A where she met Charles, her beloved ‘Chuck’. Their love and respect for each other was unique and they had an extraordinary 35 years in Lethbridge raising their 6 children. Irene was the force that enabled her children to be so engaged and active in life. She provided a solid foundation and a listening ear to the ‘15th Avenue’ neighbourhood kids. She was a skier, traveler, fitness buff, hiker, windsurfer, sailor, cycler, and boater — and she hosted a great party. An avid reader, she enjoyed discussing social issues and politics and always had an opinion on current events. Irene embraced the move to Calgary, when Charlie was appointed to the Court of Queen’s Bench. She supported the theatre and shared her love of the arts with friends and grandchildren. With lifelong friends, she hiked in the Bugaboos, bird-watched in Galapagos, enjoyed the cabin on Lasquiti Island, sailed in the Caribbean and boated down rivers in Europe. She cherished her new friendships with her book and bridge clubs and met regularly with her U of A Nursing classmates. Irene navigated transitions seemingly without effort. When Charlie had a severe stroke at the age of 69, she provided the support and encouragement that enabled him to live at home and to continue to enjoy life. She became the competent captain of her ocean cruiser and enjoyed many day and overnight trips in the Gulf Islands until her last outing on the boat at the age of 85. Her move to a retirement residence brought her a great group of new friends who enjoyed many laughs together. Even as she grew older, she rarely turned down an invitation to party, to travel, or to try out a new restaurant. Irene loved her family deeply and she showed that love through her generosity of spirit. Her children, Marni and Steve, George and Carole, Carol and John, Jeph and Julie, Jud and Krista and Jane and Sean meant the world to her. She had a special bond with each one of her grandchildren, Nicolas, Brock, Erica, Jennifer, Molly, Christopher, Nathan, Jordie, Spencer and her adopted grandchild Carlyle, who all appreciated her sense of fun and wisdom. She welcomed their partners Dorotea, Cody, Arel and Ben and was absolutely delighted with Arlo, her first great-grandchild. Irene will be missed by Charlie’s sister, Carol Snedden, and family and by her brother’s wife, Francoise Greenwood, and family. Special lifelong friends will remember their ‘Bugsy’ with love. The family thanks Irene’s doctors, including Dr. Shelly Stokes. A Celebration of Irene’s life will be held at Calgary Golf and Country Club (One and one half blocks West of Elbow Drive on 50th Avenue S.W., Calgary, AB) on Thursday, January 8, 2015 at 2:00p.m. Condolences may be forwarded through www.mcinnisandholloway.com. Memorial donations in her name may be sent to the Asthma Society of Canada www.asthma.ca. In living memory of Irene Virtue, a tree will be planted at Fish Creek Provincial Park by McINNIS & HOLLOWAY FUNERAL HOMES, Park Memorial, 5008 ELBOW DRIVE S.W. Calgary, AB, T2S 2L5, Telephone: 1-800-661-1599.