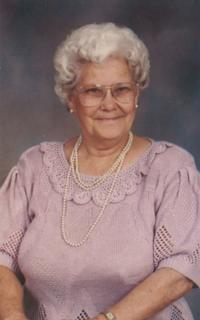 JULIA MARY NEHER, of Lethbridge, AB, passed away at the Good Samaritans Society West Highlands, on Sunday, January 11th, 2015 at the age of 94 years. Julia was born on October 31, 1920 in Bukovina, Romania and at the age of one, immigrated with her mother to Regina, Saskatchewan. Julia’s childhood and teen years were spent in southern Saskatchewan, attending school and working in her community. Julia met George Neher at a dance near Markinch, Saskatchewan and they married in 1939. They moved to southern Alberta in 1940, settling near Diamond City where they raised their four children and successfully farmed until retiring to Lethbridge in 1975. Mom enjoyed her involvement with the Canadian Mental Health Society and thrived on her continuous pursuit for higher education at the Lethbridge Community College. She was a dedicated volunteer at the Salvation Army and the Lethbridge Senior Centre and faithfully attended Christ Trinity Lutheran Church. Julia is survived by her two sons Ronald (Ann) and Gary, daughters Marlene and Debbie, 12 grand children, 18 great-grandchildren, sister Mary (Raymond) of Medicine Hat, brother Albert (Sylvia) of Dunster, B.C. and numerous nieces and nephews. Besides her loving husband George, Julia is predeceased by her parents Andrew & Theresa Lorenz, brothers Joe, John and Mike and daughter-in-law Fay Neher. A Funeral Service will be held at CORNERSTONE FUNERAL HOME, 2800 Mayor Magrath Drive South, Lethbridge, AB, on Monday, January 19, 2014 at 12:00 P.M.

One Condolence for “NEHER Julia”