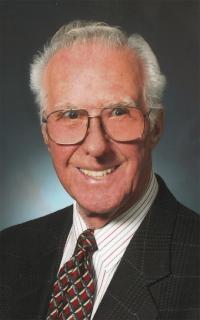 1926 ~ 2015
It is with such profound sadness that the family of The Honourable Justice Clarence George Yanosik announce his passing on Saturday, January 10, 2015, at the age of 88 years. He was the beloved husband and best friend of the late Cecily G. Yanosik, his wife of 57 years. Clarence will be very deeply missed by his family; a sister Florence (John) Klem of Edmonton, and children, Robert (Irina) Yanosik of Airdrie, Larry (Lisa) Yanosik of California, Laurie (Craig) McClelland of Three Hills, and youngest son Tim Yanosik of Lethbridge. He is also survived by three grandchildren; Glen Yanosik, Kyle Yanosik, Jessica (Karl) Erickson, and a step-grandchild, Lisa (Ryan) Claxton. He was predeceased by a sister, Donna, in 1949. Dad was born in Lethbridge on April 20, 1926. He was raised, grew up, and was schooled, and for the most part, resided and worked in Lethbridge. In late 1943, Dad joined the RCNVR and remained in active duty and service until late 1945. Enrolling at UBC in 1947, Dad graduated with both a Bachelor of Arts Degree, as well as a Bachelor of Laws Degree. Following graduation, he articled with Moscovich, Moscovich, Spanos, and Matisz, to which in 1956, he became a full and equal partner in the firm. By 1964, my dad decided to form a new partnership with Rice, Prowse, Paterson, and Maclean. This partnership was not to be long lasting because in 1969, Dad was appointed Judge of the District Court of Southern Alberta and a local Judge of the Supreme Court of Alberta. By 1970, he had also been appointed Chairman of the Provincial Advisory Board for the Province of Alberta under the Veteran’s Land Act. In 1979, he was appointed Justice of the Court of Appeal of Alberta. By 1982, Dad was also appointed a Deputy Judge of the Supreme Court of the Yukon Territory. On his birthday, April 20, 2001, Dad retired from all judicial offices. In May 2007, Dad was inducted into the Lethbridge Sports Hall of Fame as an Athlete and Builder. His dedication and efforts helped to keep baseball alive and well during those post-war years. In his more than 20 years of baseball, Yanosik wore several hats — athlete, player, coach, manager and builder, says John Klem, who along with Steve Odney and Yanosik, were dubbed the \”Awesome Threesome\” of outfielders. \”You’re more than a wonderful Man, you’re the keeper of memories, the maker of everyday miracles, and the one whose love brightens ordinary days and makes every occasion special\” In lieu of flowers, those who wish may make memorial donations in memory of Clarence, to the University of Lethbridge in support of the Honourable Clarence G. Yanosik Scholarship, University Advancement, A735 — 4401 University Drive W., Lethbridge, AB, T1K 3M4 or by phone at 403.329.2582. Send condolences at www.mbfunerals.com