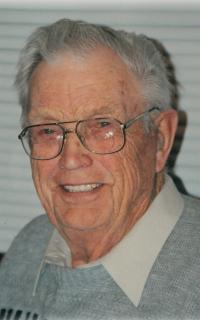 BIG SVEND AAGE JENSEN of Magrath, Alberta, passed away suddenly January 20, 2015 at the age of 98. Svend was born in Foldby Aarhus, Denmark March 11, 1916. His parents were Jens Kristjan Jensen and Gjertrud Marie Sejersen, of Denmark. He married Eva Andersen in Aarhus Denmark April 20, 1946. They immigrated to Magrath, Alberta, Canada in August of 1949 where they raised seven children: Paul (Susan) Jensen, Inger (Duane) Schaufert, Leo (Linda) Jensen, Kenneth (Shirley) Jensen, Betty (Gordon) Hirsche, Chris (Linda) Jensen, and Robert Jensen. He is also survived by his son Bent (Bente) Christensen who lives in Denmark. Svend had 23 grandchildren, 50 great grandchildren, and 2 great great grandchildren. Sven was predeceased by his wife Eva Jensen, his parents, sister Edith and brother Vagner. When Svend came to Canada he worked on farms for a few years, until he started working at the window factory then known as Tanco Millwork. He was mostly in charge of setting the machines and keeping them running properly. There he worked until he retired at the age of 67 years. Svend and Eva, along with their youngest son Robert (Bobby), loved to go camping and fishing. They loved spending time in the mountains. Eva passed away in 1995 and then he mostly stayed home. He was known by all in Magrath, and you would see him on his scooter heading to the café for coffee with his friends. Svend was fortunate to live a long healthy life of almost 99 years before he passed away. The Funeral Service will be held on Friday, January 23, 2015 at 2:00 p.m. at The Church of Jesus Christ of Latter-day Saints, MAGRATH STAKE CENTRE, Magrath, Alberta. Friends may meet the family prior to the service from 1:00 to 1:45 p.m. Interment in the Magrath Cemetery. In lieu of flowers, memorial donations may be made to SASH, Box 280, Magrath, AB T0K 1J0.

One Condolence for “JENSEN Svend”