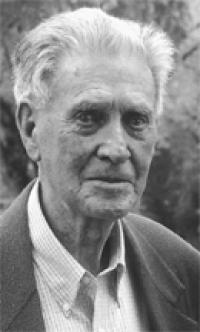 Dec. 10, 1916 – Jan. 15, 2015
In the early morning hours of January 14, Eggert passed from this earthly life at the age of 98 at the Chinook Regional Hospital in Lethbridge. Eggert was born on Dec. 10 1916 on the family homestead at Spy Hill, Sk. Eggert was a farmer at heart and farmed until 1982 when the farm was sold. During the winter months of 1954-1957 Eggert made curling ice at the Meadow Lark Curling Club in Calgary, Alberta. It is here where he met his wife Marg Walsh. They were married Nov. 25, 1957. They moved back to the farm that spring. Eggert and Marg had 2 children a son Kelly and a daughter Angie. Eggert was predeceased by his parents Einar & Meta Olson, his brothers Paul (Dolly) , Martin (Eva) and 2 sisters Nina Kirby and Ella (Jim) MacDonald. He was predeceased by his loving wife Marg Sept. 7, 2001. Eggert is survived by a son Kelly (Carol) and their children Anna, David, Cheryl (David) and James (Faithy); his daughter Angie and her children Heidi, Trina, Nikki (Mark) and Michael. He was predeceased by one granddaughter Tasha. He is also survived by 8 great grandchildren; Jessie-James & Solomon Olson, Levi Sage, Alexis, Ayden, Ethan, Seth and Lacey Briere. A memorial service will be held on January 23 @ 1:00 pm at Park Meadows Baptist Church 2011 15 Ave. North, Lethbridge Alberta.

One Condolence for “OLSON Eggert”