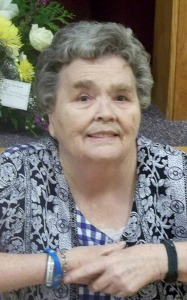 January 14, 1939 — January 21, 2015
Irene McLean-Rennie of Magrath, AB (formerly Cardston), passed away peacefully at the Raymond Health Centre on Wednesday, January 21st, 2015 at the age of 76. Beloved Aunt to Christine (Glen) Bly and honorary “Auntie” to many others, Irene will be foreverr remembered in the hearts of all those who knew her. Relatives and friends are invited to pay their respects at LEGACY FUNERAL HOME – 107 6th Street W., Cardston, AB on Tuesday, January 27, 2015 from 7:00 — 8:00 pm. A Memorial Service will be held at the GARDEN PLACE CHAPEL — 170 North Centre Street, Magrath AB, on Wednesday, January 28, 2015 at 12:00 pm. Private family interment in Cardston will be held prior to the Memorial Service. The family would like to thank the staff of both the Magrath Garden Vista Good Samaritans and the Raymond Health Center for their loving care. Memorial donations may be made directly to the Alzheimer Society of Alberta (www.alzheimer.ab.ca). Email condolences to legacycardston@gmail.com.