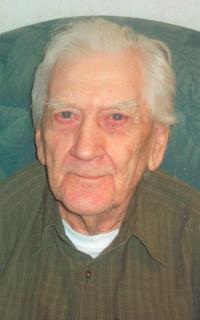 Nathan Johnson passed away on Tuesday, February 3, 2015, at the age of 93 years, beloved husband of the late Pearl Johnson. He leaves to cherish his memory his children, Lauree \”Ree\” Sauter of Medicine Hat, Nels (Carol) Johnson of Raymond, Gerry Johnson of Port Alice, BC, and Mary-Ann McDonald of Lloydminster; one son-in-law, Manfred Both of Edmonton; his sister, Elva Bashaw of Calgary, as well as many grandchildren, great grandchildren, great great grandchildren, nieces, nephews and cousins. He was predeceased by his parents, Harry and Goldie Johnson; his wife Pearl; one daughter, Linda Barth; one son-in-law, Hugh Sauter and one daughter-in-law, Carol Johnson. Nate grew up in Raymond, Alberta and lived there most of his life. He was a heavy duty mechanic by trade and he also enjoyed farming, gardening, playing pool, shuffleboard and cribbage, and playing the guitar and harmonica. Nathan moved from Raymond to Lethbridge then to BC before moving to Medicine Hat where he passed away. The funeral service will be held in the PATTISON CHAPEL (Medicine Hat) on Friday, February 6, 2015 at 3:00 p.m. with Life Celebrant, David Townsend. To e-mail an expression of sympathy, please direct it to: pattfh@telusplanet.net subject heading: Nathan Johnson, or you may visit www.pattisonfuneralhome.com and leave a message of condolence. Arrangements are by the PATTISON FUNERAL HOME AND CREMATORIUM 540 South Railway St. SE, Medicine Hat T1A 2V6. Please call 1-866-526-2214 for further information.