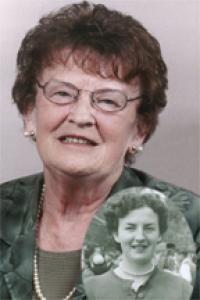 1936 ~ 2015
It is with immense sadness we announce the passing of K. Margaret Jackson at the Chinook Regional Hospital on Tuesday, February 3, 2015. Margaret will be dearly missed and leaves behind to mourn her are: beloved husband Ron whom they would have celebrated 50 years of marriage on February 13; children Ross (Marika) of Edmonton and Julie (Allan) of Lethbridge; seven grandchildren Liam, Nolan, Olivia, Alisha, Ashlee, Baylee and Jordan; two great-grandchildren Dominic and Teigan; sister Joan (Denis) Joyce of New Zealand; sister-in-law Eileen Ross of New Zealand; brothers-in-law Danny (Thelma) Jackson of Bancroft, ON and Jackie (Jeanie) Jackson of Richmond, BC; numerous nieces, nephews and their families; as well as many friends. Margaret was born on January 8, 1936 in Gore, New Zealand. She met Ron the love of her life in New Zealand. He moved her around the world to Canada to be married in Balmertown, ON on February 3, 1965. They spent 31 years in Crowsnest Pass and then moved to Lethbridge, in 2001. Margaret’s hobbies included curling, knitting, camping, and spending time with family and friends. Margaret was a devout catholic and was very involved with the church and the CWL for many years. Family and friends are invited to pay their respects between 7:00 pm and 8:00 pm on Sunday, February 8, 2015 at MARTIN BROTHERS RIVERVIEW CHAPEL, 610 — 4 Street South, Lethbridge. A Funeral Mass will be celebrated at 10:00 am on Monday, February 9, 2015 at OUR LADY OF THE ASSUMPTION CATHOLIC CHURCH, 2405 — 12 Ave South, Lethbridge, with Father Kevin Tumback celebrant. Send condolences at www.mbfunerals.com