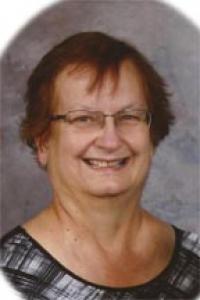 Mrs. Cherylanne Mueller of Lethbridge, beloved wife of Mr. Roger Mueller, passed away at the Foothills Hospital in Calgary on January 31, 2015 after a long and courageous battle with cancer. Cherylanne Monica Scherer was born in Medicine Hat on June 28, 1955 and raised on the family farm at Faith, in the Foremost district. She attended school in Hoping and Foremost. She moved to Lethbridge in 1973 with her parents and attended the University of Lethbridge to receive her Bachelor of Education degree. On October 8, 1977 she married Roger Mueller in Lethbridge. They have two loving children, Amber and Joel Mueller. Cherylanne managed motels and substitute taught for several years. She enjoyed selling Avon, sewing dance costumes, handicrafts, playing cards, gardening, music and dancing. Above all, she enjoyed spending time with her friends and family. Cherylanne will be remembered for her many kindnesses towards others. After being diagnosed with breast cancer and ovarian cancer in 2008 she was determined to remain positive and not let cancer control her life. She participated in three drug trials through Tom Baker Cancer Centre in Calgary for ovarian cancer to help advance the knowledge of a possible cure for this dreadful disease. She did this to help herself and all women of the world who are stricken with this terrible disease. Cherylanne is survived by her husband Roger, her two children Amber and Joel, and her siblings Jim and Sheila Scherer of Port Hope, Ontario, Bob and Elaine Scherer of Kelowna, BC and Bob and Marilynn Heaton of Lethbridge. She is also survived by a large extended family of Scherer, Herbst, Mueller and Rogers families. She was predeceased by her parents Henry and Margareta Scherer and Roger’s parents Art and Ruth Mueller. A Funeral Mass will be celebrated at OUR LADY OF THE ASSUMPTION CATHOLIC CHURCH – 2405 12 Avenue South, Lethbridge, Alberta, on Saturday, February 7, 2015 at 11:00 A.M. with Father Kevin Tumback celebrant. Following the Funeral Mass, an interment at Archmount Cemetery will be held.

One Condolence for “MUELLER Cherylanne”