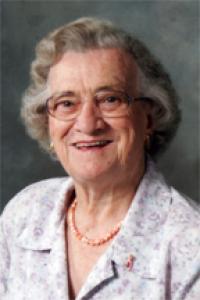 1924 – 2015
It is with profound sadness we announce the passing on February 2 of Florence May (Babs) Treber. Babs was born July 15, 1924 in Medicine Hat, daughter of Robert and Esther Ann (Davis) Lord. They lived in Grassy Lake and she attended the Chamberlin School from 1930 to 1934. The family moved to Taber where she went to Taber Central School until 1941. She had three sisters: Jennie Dunn, Essie Archer, and Doreen Quaife, who all predeceased her. She is survived by her brother Bill Lord (Joyce) of Lethbridge. She married John Louis Treber on May 21, 1941, and started her family in 1942. She was predeceased by her loving husband John (1984) and two daughters, Linda Jones and Janet Johnson. She is survived by her two sons, Bill Treber (Sharon) of Lethbridge, and Gordon Treber (Mona) of Revelstoke. She is also survived by eight grandchildren and 12 great grandchildren. She worked in retail sales at Reitman’s, Kresgees, Avon, and Beauty Counsellor. She was also a census taker for a number of years. She did volunteer work for the Red Cross and served as the Boy Scouts District Council secretary during the development of Camp Impeesa. Babs was also a lifetime sorority member of Beta Sigma Phi, and served as their secretary in Taber 2003 and 04 as well as a lifetime member of A.N.A.F #34 Lethbridge and also a member of O.O.R.P. She was also a long time member of the Anglican Church Women. After John’s passing, she had a great companion in T. Austin James. They shared many happy years in Taber, and wintering in Apache Junction, Arizona. After Austin’s passing she lived in Harmony Home, Taber, and later Clearview Lodge, Taber. In Clearview, she made many friends with residents and staff. She loved the life she had and the staff there, and was very happy. Babs spread kindness and happiness wherever she went. She enjoyed a good laugh, a game of cards and Scrabble. Everyone was treated with respect and she had a remarkable love for life, people and animals. Babs was very outgoing and made friends easily. Her compassion led her to volunteer work and a life of helping individuals whether they needed a good ear to listen or even financial help. In lieu of flowers, please make a donation to the charity of your choice, or to St. Theodores Church, 5120-44 Avenue, Taber, AB T1G 1A9. A Celebration of her life will be held on Saturday, February 7, 2015 at 3:00 p.m. at CHRISTENSEN SALMON GENERATIONS FUNERAL HOME, 703-13 Street North, Lethbridge.