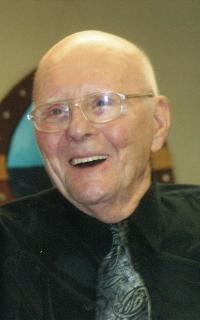 1924 ~ 2015
Mr. Melvin Floyd Cowie of Picture Butte, beloved husband of wife Iris June Cowie, passed away peacefully in Picture Butte on February 7, 2015 at the age of 90 years. Melvin was born on November 2, 1924 to George Melvin Cowie and Nina Belle Buck, the eldest of three boys. He completed his education in Rocky Mountain House, AB and in 1944 he married Iris June Gray. Eventually settling in Barons, AB with June and sons Terry and Robert, Melvin began his successful 40 year career as a massage therapist and his patients came from all over the world. Mel was instrumental in establishing the Massage Therapy Association of Alberta, he was a member of the Lethbridge Masonic Lodge, the Barons Legion, the Barons Elks and the Eastern Star. Melvin’s mission in life was simply to help others however he could. Besides his loving wife, Melvin is survived by his sons Terry (Yvonne) and Robert (Lynn); grandchildren Jeff (Laureen), Haedyn, Madelyn Cowie, Greg (Asheley), Liam, Grayson Cowie, Jocelyn Doyle (Darcy), Jennifer Cowie (Justin Giles), Bryan (Katie) Cowie. A Visitation will be held on Thursday, February 12, 2015 at 1:00pm at MARTIN BROTHERS RIVERVIEW CHAPEL, 610-4 St. S., Lethbridge, AB. A Funeral Service will follow at 2:00pm on Thursday, February 12, 2015 at MARTIN BROTHERS RIVERVIEW CHAPEL, 610-4 St. S., Lethbridge, AB. A private family graveside service will be held in Garth Cemetery, Rocky Mountain House, AB. In lieu of flowers, those who wish may make memorial donations to the Canadian Cancer Society, 317-10 St. S., Lethbridge, AB, T1J 2M7. Send condolences at www.mbfunerals.com