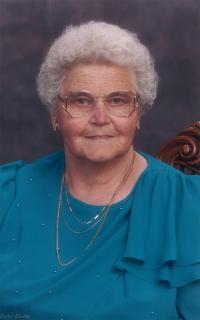 1927 ~ 2015
Mrs. Mary Perkovic of Lethbridge, beloved wife of the late Mr. Joseph Perkovic and mother of the late Katherine Perkovic, passed away peacefully at the Edith Cavell Care Centre on Thursday, February 12, 2015 at the age of 87 years. Mary was born on February 23, 1927 in Radikovci, Croatia to Michael and Elizabeth Sisjulak. In April of 1950, she immigrated to Canada with her husband Joseph and infant daughter Katherine. They settled in the Lethbridge area and in 1955 purchased a farm north of Picture Butte. They moved to the city of Lethbridge in 1974, and Mary took a position with the Federal Government in Housekeeping. She took early retirement at the age 60 to enjoy time with her grandchildren. From simple things to like going to the playground, to family trips to Disney World, she thrived on time spent with her grandchildren. Her favorite fridge magnet from the Tyrell Museum expresses it all: \”Dino-Mite Grandma\”. Mary is survived by her two daughters Julie Kraft and Mary Pederson; her son Steve Perkovic; grandchildren Jon and Kara Megella, Aaron Kraft, Laurie-Ann, Ryan and Sean Pederson; her sister Julia Romanchuk; great-grandchildren Alexandra and Devon Monroe, and great-great-grandson Cyrus Monroe; sons-in-law Steve Kraft and Bob Pederson; daughter-in-law Ute Perkovic. She was predeceased by her loving husband Joseph Perkovic; her parents Michael and Elizabeth Sisjulak; her brother Stephen Sisjulak; and her daughter Katherine Megella. A Visitation will be held at 7:00 pm, on Monday, February 16, 2015 at MARTIN BROTHERS RIVERVIEW CHAPEL, 610-4 St. S., Lethbridge, AB. A Funeral Service will be held at 10:00 am on Tuesday, February 17, 2015 at ST. BASIL’S ROMAN CATHOLIC CHURCH, 604-13 St. N., Lethbridge, AB with Father Nathan Siray, officiating. Send condolences at www.mbfunerals.com