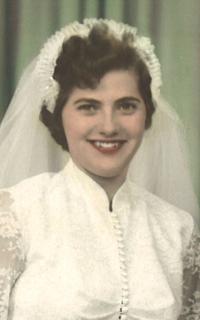 1934 ~ 2015
Mrs. June Allen of Lethbridge, beloved wife of the late Mr. Jack Allen, passed away on February 13, 2015 at the age of 80 years. June was a loving daughter, sister and mother who dedicated every moment of her life caring for the people in her family. She was an independent woman, a proud homemaker, a wonderful cook, an expert gardener, and a huge Elvis Presley fan. June and her husband Jack had a long rich life together that included dancing, music, home, family, and love. June is survived by her sons Ward Allen and Lee (Sharon) Allen; her grandchildren Cheraya, Troy (Shelby) & Dwight; her sister Judy and brother Alvin. She was predeceased by her parents William & Doris Bolokoski, her husband Jack, brother Ervin, and her daughter Paddy. June’s passing has left a hole in the hearts and lives of her family and friends. A private service will be held at a later date. Send condolences at www.mbfunerals.com.

One Condolence for “ALLEN June”