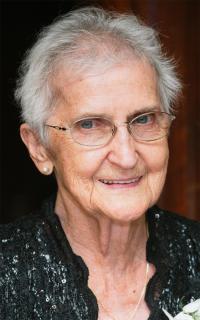 1930 ~ 2015
Albina Chronik Redlinger (nee Slodkowska) died peacefully in Mesa, Arizona on February 13, 2015 at the age of 84 years. Albina is survived by her husband, Artie Redlinger, her five children: Stasia (Andee), George (Deb), Mary, Dan (Elizabeth), Patty (Peter), ten grandchildren, seven great grandchildren, and her sisters Stasia Michalska and Apolonia Radzinska. Albina was born on August 6, 1930 in Adamowka, Poland. She married Alexander Chronik on Oct. 17, 1946 and immigrated to Canada in 1949, where they settled in Picture Butte, Alberta. Here they raised their five children. They were married for almost 52 years until Alex’s passing in 1998. Albina then married Artie Redlinger on June 27, 2002 and moved to Mesa, Arizona where she has resided for the past thirteen years. Albina’s happiest moments were spent in the company of her children, grandchildren and great grandchildren. She was passionate about scrapbooking, anything to do with her family’s accomplishments and was constantly taking pictures of her life’s precious moments. She was very devout in her faith and a long-time member of the C.W.L. Her interests also included travelling, cooking, baking and gardening. All are invited to attend and celebrate Albina’s life. Vigil Rites (Prayers) will be held at 7:00 p.m., on Monday, February 23rd at MARTIN BROTHERS RIVERVIEW CHAPEL, 610 — 4th St. S. Lethbridge. A Funeral Mass will be celebrated at 11:00 a.m., on Tuesday, February 24th at ST. CATHERINE’S CATHOLIC CHURCH, 762 Crescent Ave North, Picture Butte, with Father Newton Rodrigues, celebrant. Interment to follow at Mountain View Cemetery. In lieu of flowers donations may be made to the Canadian Cancer Society, 317 — 10 St. Street South, Lethbridge, AB T1J 2M7. The family would like to thank Senior Bridge, Carrie Fernandez, Mom’s personal hospice nurse and the staff at Infinity Hospice Care and Doctors Long and Dawson for their compassionate care. Send condolences at www.mbfunerals.com