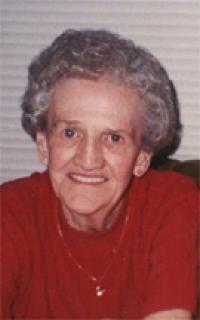 1923 ~ 2015
Elizabeth (Betty) Beattie, beloved wife of the late John (Jack) Beattie, passed away peacefully on Friday, February 20, 2015 at the age of 91. Betty was predeceased by her parents Jim and Annie Gibson; her brothers David, Charles and Billy Gibson and her grandson; Sean Beattie. Betty worked as a secretary, mainly for the Canadian Armed Forces, at various locations. She enjoyed her retirement traveling, baking, cheering for her beloved Calgary Flames and spending time with her family. Betty is survived by her sister Evelyn Westland, and sister-in-law Barb Gibson; her children Wendy (Glenn) Wyrostok, Jack (Joanne) Beattie, Bill (Trish) Beattie; grandchildren Doug (Tracy) Wyrostok, Jackie (Evan) Cossette and Ashley (Terry) Otto; great- grandchildren Samantha, Dawson, Camdyn, Loghan, Carter, Tyler, Hannah, Jimmie and Justin, as well as numerous nieces, nephews and their families. A Memorial Service will be held at 1:00 pm, on Thursday, February 26, 2015 at MARTIN BROTHERS RIVERVIEW CHAPEL, 610 — 4 Street South, Lethbridge. In lieu of flowers, memorial donations may be made in Betty’s name to the Alzheimer’s Society of Lethbridge, #402, 740 4 Ave. S., Lethbridge, AB, T1J 0N9. Betty’s family would like to send special thanks to those who cared for her while she lived at Columbia Assisted Living, Good Samaritans (Park Meadows and West Highlands). Send condolences at www.mbfunerals.com.