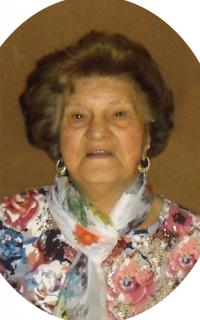 1923-2015
It is with heavy hearts and also with thanks for a long and healthy life, the family of IRENE CHABAY announce her passing after a brief stay at the Chinook Regional Hospital and St. Michaels Palliative Care Centre from complications following a number of heart attacks at the age of 91. Irene was born July 7, 1923 in Tiszaadony, Bereg County, Hungary. She immigrated to Canada in early February, 1940 at the age of sixteen, after a horrific thirty-two day journey through Southern Europe with her younger sister Jolane. She was predeceased by her loving husband of thirty-eight years Joseph Chabay, on February 28, 1981. Irene was also deceased by her parents Bill and Rosalie Nagy, sister and brother -in-law Bill Csabay, sister-in-law Irene Calcutt and several aunts, uncles, cousins, nieces and nephews in Canada, United States and Hungary. Irene is survived by her four children, James Csabay, (Marlies) and family, Priscilla Melby (Palmer) and family, Danny Chabay (Liane Fox), Janet McKillop (Laird) and family, ten grandchildren and nine great-grandchildren. She is also survived by her sister Katie Frecka and family, sister-in-law Pat Nagy and family, brother-in-law Leslie Csabay (Eleanor) and family, as well as numerous cousins, nephews and nieces. Irene will be sadly missed and remembered for her marvelous cooking, especially her chicken soup (\”Hungarian Penicillin\”), her cabbage rolls and other assorted Hungarian soul foods, all lovingly prepared and served to all who entered her home, which she tended and lived in until her passing. She had a great love of flowers and country living and was very independent until very recently. Irene loved to travel and during her lifetime saw a great deal of the world, either by car, bus, plane or cruise ship. She never left home without her hair just so, dressed to the nines and every trip, even just into town, was an adventure. Irene was a supporter and member of the Hungarian Old Timers Club, Hungarian Cultural Society, Readymade Community Association, Readymade 50 Plus Club and Canadian Legion, to name a few. She enjoyed going to events put on by these various groups. Cremation at her request. A Memorial Service will be held at ST. ANDREW PRESBYTERIAN CHURCH, 1818 — 5th Avenue South, Lethbridge, Alberta on Saturday, March 7, 2015 at 2:00 P.M. with Reverend L. Hankinson officiating. Interment will be a private family Service. In memory of Irene, If so desired, donations may be made to the St. Michael\’s Palliative Care Centre, 1400 9 Ave S, Lethbridge, AB T1J 4V, or to a charity of choice .

One Condolence for “CHABAY Irene”