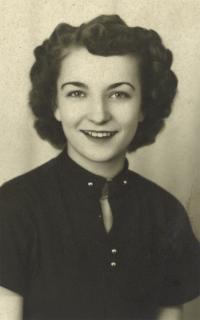 In the afternoon on Tuesday, March 3, 2015, Lois Doreen Dickinson fell asleep peacefully in death at 81 years. From a young age, Lois had strong faith as one of Jehovah’s Witnesses and it was this that brought her great comfort in her last days. Lois was born in Prince Albert on October 6, 1933. It was here that Lois met the love of her life, James William Dickinson. In grade one, James pushed her down the stairs because he liked her so much, and they never parted again. They were married on August 30, 1952, surrounded by friends and family. Lois was a mother, grandmother, great-grandmother, and a friend to many. She is survived by her daughter Jan Rolston (Douglas Rolston); her grandchildren ChantelleLinnea Bowie (Mark Bowie), Chayney William Rolston (Melissa Rolston), Scott Douglas Rolston (KatelynnRolston) and great- grandchildren Éilidh Niamh Bowie, Finn Jackson Ian Bowie, Soloman Kerry Rolston and soon to be baby boy Rolston. She is also survived by her daughter Dodi Trowbridge (Darcey Trowbridge) and her grandchildren Brittany Lynne Fox (Jeffery Fox) and Bryce James Trowbridge (Anielka Trowbridge) and great-grandchildren Afton Ryder Fox and Krew Hendrix Fox. As well as sister Verna McCandless (Darwin McCandless), niece Merlynn (Randy) King and nephew Brad McCandless. She is predeceased by her loving husband James William Dickinson, her son James (Jimmy) William Dickinson and her parents Louis and Doris Larock. Lois had confidence and faith from the bible that there will be a time when all can live in peace. Psalms 37:11. She loved sharing this message with others. Lois requested that there be no funeral service held, however memorial donations can be made to the WATCH TOWER BIBLE AND TRACT SOCIETY OF CANADA, P.O. Box 4100, Georgetown, Ontario, L7G 4Y4. She will be missed by many; we love you grandma.