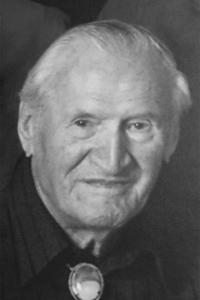 1923 – 2015
Mr. Abram "Slim" Ens, beloved husband of Mrs. Elizabeth Ens, passed away at the Coaldale Health Centre on March 9, 2015 at the age of 91 years. He was born in Felsenbach Maripol, Ekaterinaslaw, Russia but lived for most of his life in Coaldale after coming to Canada in the summer of 1927 with his parents Abram and Maria Ens. Abe was the second oldest of nine children. Abe’s childhood memories of Truax, Saskatchewan always stood out in his mind. Once in Coaldale in 1936, he began working to help support the family. He married his sweetheart Elizabeth Neufeld in 1953 and they raised four children. Abe was an automotive mechanic and ran service stations for a better part of his life. He supplemented the family income by running school bus routes for the County of Lethbridge. His dream of being a Greyhound driver became reality when Abe started his own company Yellowbird Bus Lines. Abe was involved in Coaldale Mennonite Church, a Rotary Member, and a Coaldale Town Council member for two terms. Besides his loving wife Elizabeth, he is survived by his son Wayne (Hennie), and his daughters Beverly and Carol; grandchildren Aaron and Rylund (Darcie). Abe was predeceased by his eldest son Brian on February 27, 1967. Prayers will be held at 7:00 — 8:00pm on Friday, March 13, 2015 at MARTIN BROTHERS RIVERVIEW CHAPEL, 610-4 St. S., Lethbridge, AB. A Funeral Service will be held at 2:00pm on Saturday, March 14, 2015 at COALDALE MENNONITE CHURCH, 2316-17 St., Coaldale, AB with Pastor Lillian Thompson, officiating. Those who wish may make memorial donations to MCC Lethbridge, 1117 2A Avenue N., Lethbridge , AB T1H 0E6 or Gideon’s Lethbridge Camp, c/o John Regier, 2225-27 Ave. S., Lethbridge, AB T1K 6K5. Visit www.mbfunerals.com to send a private condolence.