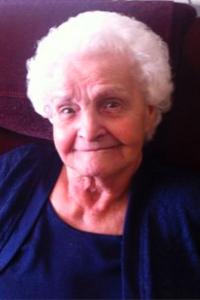 1927 – 2015
Kathleen Aubin (nee Asztalos) of Lethbridge, passed away peacefully at Good Samaritan, Park Meadow Village, on Thursday, March 12, 2015. Kay was born in Yellow Creek, Saskatchewan on March 22, 1927. In 1946 she married Thomas Aubin. Together they had four children. In 1961 the family moved to Alberta and in 1964, settled in Lethbridge, making it home. In 1977, Thomas passed away. Throughout the years, Kay worked as a baker at St. Michael’s Hospital before going into Customer Service, as she enjoyed being with people. Kay met her soulmate, John Popp, and they went on to spend 16 joyous years together. They loved to camp and fish in the foothills and Pincher Creek area. They had their favorite getaway to a little cabin in Radium to enjoy the hot pools. John, having six children of his own, accepted Kay’s four as family. All her grandchildren knew him as Grandpa John. Sadly, John passed away in 1992. She loved him till the day she passed away. Kay’s had many friends who helped to fill her life with happiness once again. She was an excellent cook who enjoyed having them over for dinner and a good game of Skip Bo. Being very social and flamboyant, she eventually found music, playing the drums and singing in a band for numerous years. How she enjoyed entertaining people at the Jams and Senior Homes in Southern Alberta. This is where she was truly in her element; the joy in her eyes was evident. She lived her dreams; a good, long, and fulfilling life. In January 2013, her health required considerable more care, forcing a move to a Seniors Home. Hearing her sing ‘Only Fools Rush In’ on her 85th birthday was heartwarming for her family. Once again, she made the residents of a Senior Home smile. Kay was an active member of the Legion Ladies Auxiliary for 35 years. She was a member of the Blue Ridge Jam Society in Lethbridge, and also the Coal Miners Club in Hillcrest, AB. Kay is survived by her three children Loretta (Ken) Kuehn, Frank (Shelley) Aubin, and Darlene Aubin; seven grandchildren and seven great- grandchildren; one sister and two brothers. She was predeceased by her husband Thomas in 1977; her soulmate John Popp in 1992; her son Gerard (Gerry) Aubin in 1996; both her parents; three brothers and five sisters. A Memorial Celebration of Kay’s Life will be held at 2:00pm on Friday, March 20th, 2015 at MARTIN BROTHERS RIVERVIEW CHAPEL, 610 – 4 Street South, Lethbridge AB. In lieu of flowers, those who wish may make a memorial donation in Kay’s name to Good Samaritans, Park Meadows Village so the residents may benefit. 1511 — 15th Avenue North, Lethbridge, AB, T1H 1W2 Attn: Carmen Peterson. Visit www.mbfunerals.com to send a private condolence.