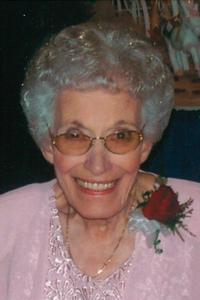 1927 – 2015
Wilma Edith Boe of Lethbridge, beloved wife of the late Arnold Boe, passed away peacefully at Lethbridge Regional Hospital on March 17, 2015 at the age of 87 years. Wilma was born November 3, 1927 to parents William and Edith Tyler. She received her early education in Lomond and the remainder in Calgary during the war. Her mother Edith passed away in 1935. She worked in Calgary and Edmonton before meeting her husband Arnold. They were married in Vulcan December 5, 1953. This "City" girl adjusted quickly to farm life near Lomond, and was famous in the Armada District for the cooking and baking skills she learned from Grandma Boe. Mom and Dad sold the farm in 1981, retiring to Vulcan and eventually to Lethbridge in 1991. After Dad’s passing in March 2000, Mother lived with daughter Helen and granddaughter Lisa, before moving to the Blue Sky Lodge in 2007. She enjoyed her time at Blue Sky Lodge immensely until the time of her passing; her family will be forever grateful for the kindness shown by all the staff there. Wilma is survived by daughters Helen (Dave) Chartrand and Sandra (Larry) Ames; sons Adrian (Teresa) Boe and Lindsay (Carol) Boe; Grandchildren Lisa (Jamie) Johnson, Sharmain McIvor, Landon (Joanne), Erin (Brad), Ashley, Darren (Debbie), Kyle, Vicky, and Tiffany (Rob); as well as eight great-grandchildren. She is also survived by her sister-in-law Margaret Tyler. Wilma was predeceased by her parents Wilma and Edith Tyler; her son Cameron; and Brother Leonard "Bud" Tyler. A Memorial Service will be held 1:00 pm on Monday, March 23, 2015 at MARTIN BROTHERS RIVERVIEW CHAPEL, 610-4 St. S., Lethbridge, AB. Flowers are gratefully declined. To those who wish, memorial donations may be made to Blue Sky Lodge c/o The Green Acres Foundation, 105 — 5 Avenue South, Lethbridge, Alberta T1J 0Z7. Visit www.mbfunerals.com to send a private condolence.