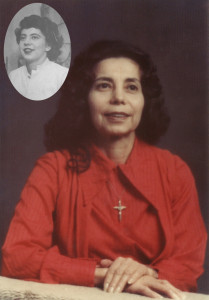 1932 – 2015
Eva Sawchuk (nee Richard) beloved wife, mother, grandmother & great grandmother, passed away suddenly but peacefully on Monday, March 16, 2015 at her home in Lethbridge. Eva was predeceased by her husband Steve Sawchuk. She will be deeply missed by her nine children, sixteen grandchildren, four great grandchildren and numerous nieces, nephews and friends: Catherine Kiefuik and her children Russell (Nicole) Kiefuik and Kevin Kiefuik; Stephanie Sawchuk; Terry Tokariuk (Gordon), their children Starla Tokariuk and Jeff (Ashley) Tokariuk; Steve Sawchuk (Jean Bettger); Michelle Farrauto (Marco), her children Candice (Anthony) Vercillo, great grandchildren Ariana and Matteo, and Chase Mc Murren; Geoff Sawchuk (Kim), their children Kaytlin, Stephen and Cole; Wally Sawchuk (Lene); Valerie Ciancio (John) their children Rebecca and Stephen; Gail Flitton (Darren), her children Aaron and Christopher Vandebeek; niece Dora Jean Knoblick (Fred), her son Dustin (Robyn) Hemingson, great grandchildren Ethan and Roman; and friend Belle (Henry) Van Vliet, both of whom she treated like her children. Eva greeted family, friends and strangers alike with a kind, caring and loving heart. Born to Alphonse and Jeanne (nee Curtaz) Richard and raised in Richer, Manitoba. Eva Alma Marie Richard was the 13th child from a family of 17. She is survived by her brother Armand Richard and sister Irene Wilkinson. Eva moved to Alberta and married Steve Sawchuk in 1952.Together they farmed and raised their family in the Sunnyside district. Later in life she worked at Canbra Foods, retiring in 1998 after 27 years. During her time at Canbra, Mom became Vice President of the union. While in her role as Vice President, she advocated for equal pay for all women. She was extremely proud of earning her GED when challenged to keep her job. She insisted that all of her nine children complete high school and obtain a driver’s license. These things were very important to her. Her motto was “always take pride in your work no matter what it is and do it to the best of your ability” Mom left the farm and moved into Lethbridge to live with her daughter Stephanie. Mom had a welcoming heart to everyone, her door was always open and the coffee on. The rare times she spent alone, she would pass the day with prayers, crossword puzzles, or getting caught up with distant friends and relatives on the phone. Mom will be remembered for her favourite saying “I may not always be right, but I am never, ever wrong”. Eva touched our lives with a warm smile, open arms and unconditional love in her heart. She stood strong with dignity and grace. She took life in stride, embracing the happy moments along with the sad. She often saw the value in people that others never knew they had. Giving more than she had, without question or reservation. Eva’s devoted faith in God assured He would provide for her. It’s all those she leaves behind who feel the deepest pain and sadness. We are all at peace knowing she is now with God and with her loving Mother. In Eva’s own words “I was very close to my mom. After she died, I spent my time longing for her, and dreamt of her a lot. Even though my day dreams took me to faraway places, my heart took me home to the old homestead where in my heart, I still belong.” Mom is now resting in the arms of the Angels and Saints, and all of those she loved that left before her. Love you, Mom. Rest in peace. Vigil Rites will be held at 7:00 pm on Friday, March 20, 2015 at MARTIN BROTHERS RIVERVIEW CHAPEL, 610-4 Street South, Lethbridge, Alberta. A Funeral Mass will be held at 10:00 am on Saturday, March 21, 2015 at ST. BASIL’S CATHOLIC CHURCH, 604-13 Street North., Lethbridge, Alberta, with Father Nathan Siray, officiating. Interment to follow in the Mountain View Cemetery. Visit www.mbfunerals.com to send a private condolence.

One Condolence for “SAWCHUK Eva”