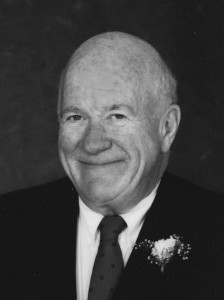 Ian Magnus Groundwater, our beloved father and devoted grandfather, passed away in Lethbridge, Alberta, on March 17, 2015. Ian was born on October 2, 1931 in Winnipeg to Ian and Etoile Groundwater. He attended St. James Collegiate and the University of Manitoba. He went on to become a Chartered Accountant in 1956. In 1959, Ian moved to Edmonton where he started a family and a career, which spanned more than three decades across western Canada, in the building-supplies industry. In retirement, Ian pursued his passion for collecting vintage firearms and enjoyed his daily visits with friends at the Lethbridge Public Library. Ian will be lovingly remembered by his 4 children: John (Ann Cates) of Ashburn, VA, Nora Jane (Bryce Hawkings) of Calgary, Patricia Skwarchuk (Mark) of Kalispell, MT, and James (Tina Madden) of Toronto; and his 9 grandchildren: Brad, Kayley, Daniel, Laura, Sophia, David, India, Ivy and Levon. He is also survived by his sister Anne Hutchinson of Mississauga, ON. Cremation has taken place and a gathering in Ian’s memory will be planned at a later date. In lieu of flowers, donations may be made in his memory to the Lethbridge Public Library, 810 5 Ave S, Lethbridge, AB T1J 4C4. Visit www.mbfunerals.com to send a private condolence.