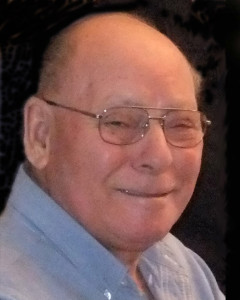 EUGENE “GENE” O. MOSIER, cherished husband of Agnes Mosier, of Picture Butte, passed away at the St. Michael’s Health Centre on Monday, March 23rd, 2015 at the age of 86 years. Gene is survived by his wife Agnes – married for almost 42 years, his children Trudy (Cliff) Nelson, Rick (Patty) Mosier, Kathy (Tom) Lunnin and Agnes’ daughter Shawna Gienow; his grandchildren Bryce (Rhonda) Nelson (great-grandsons Cameron and Spencer), great-grandson Devin (Stef) Booth (great great-grandson Finnigan), Trisha (Adam) Mickelson (great- granddaughter Heidi) and Candace Lunnin; as well as Shawna’s daughters; Christine (Toby) Dodsworth, Amanda Dodsworth and Samantha Gienow; his brother Bob (Olga) Mosier and a sister Joanne Rogers. He was predeceased by his parents Clark & Grace, granddaughter Tanya Nelson and a brother-in-law Ed Rogers. Gene was born July 21, 1928 in Daysland, Alberta. He started out as a farm boy but his career was in the propane industry, first a propane delivery man, then as a gasfitter and pipefitter and eventually owning his own business in St. Albert (we moved a lot when we were kids). He sold the business to Cigas and took on the roll as manager for them first in Edmonton then moving to Calgary in 1980, before retiring and becoming a handyman. This last career took him well into his seventies before he and Agnes retired together and moved to Picture Butte in 2007 (small town life has suited them both). A Celebration of Gene’s Life will be held at CORNERSTONE FUNERAL HOME,2800 Mayor Magrath Drive South, Lethbridge, AB on Friday, March 27, 2015 at 2:00 P.M. with a Reception to follow at Cornerstone Funeral Home’s reception room. In memory of Gene, donations may be made to either The Heart & Stroke Foundation of Alberta: P.O. Box 2211, Lethbridge, Alberta T1J 4K7, or to a charity of your choice.

One Condolence for “MOSIER Eugene”