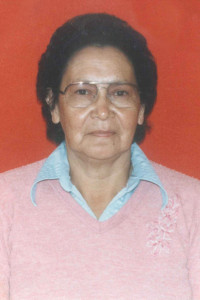 Mildred Nellie Scout, “Pokskiaakii”, beloved wife of the late Louie Scout, passed away on Friday March 20th, 2015 at the age of 83 years. Mildred was a beloved wife, mother, grandmother, great grandmother and great-great grandmother. Mildred leaves to mourn her children, Sandra, and children, Corrine (Garrett), J.R. (Leslie), L.G., C.J; Flora (Don) and children, Jenny (Tyson), Jeremy, Amy (Darcy), Jonelle, Little John; Gary (Kym), and children, Millie, Ross (Jacey), Samantha, Dexter (Dezary); also 25 great grandchildren, and 2 great -great grandchildren. Mildred also leaves to mourn in her passing siblings, Wayne (Christine) Davis, Roland Scout, Brian Scout and Rosemarie Davis; extended families include Big Sorrel Horse, Rider, Eagle Bear, Red Crow, Black Water, First Charger, Blood, Wadsworth, Brown Weasel, Many Grey Horses, Scouts and Kings. Mom was born on the Blood Reserve on May 26, 1931 to Frank and Flossy (Rider) Big Sorrel Horse. She received her education at the St.Paul¹s Residential School and later attended a Life Skills course in Standoff. Mom worked at various jobs in Southern Alberta as house keeper, and at the Tanco Windows and Doors (Magrath). The job that Mildred enjoyed the most was raising her family, her children, grandchildren, great-grandchildren, great-great grandchildren. Mom will be remembered for her thoughtful giving nature, her humour and her strength that she so lovingly shared with her family and friends. Mom was pre-deceased by her husband Louis (1991), her children Van (1977), Kevin (1979), Missy (1989), Garth (1991), grandson Corey (2009), great grandson Kevin Dexter (2014), parents Frank Big Sorrel Horse, Flossy Rider, brothers Gilbert Big Sorrel Horse, Warner, Franklin, Reil Scout, sisters Frankina and Margorie Big Sorrel Horse. Mom and Dad lived in various places in Southern Alberta and settled in Magrath in 1966. They resided there until 1980 and moved to their homestead near Lavern, Alberta. It was there that they built their farm, raising horses, cattle as well as other farm animals, including chickens, geese, rabbits, and her 2 favorite goats ³Gus² and ³Jimmy². It was here where her grandchildren were given the opportunity to experience farm life. Mom was actively involved in traditional spirituality, she attended ceremonies conducted by many notable ceremonialists who looked forward to her attendance. She went to the Sundance in Montana several years; memories of her involvement are still held by lodgekeepers. Mom was known to be a very strong and noble woman. She lived a ceremonial life in a good and reverent manner which she role modeled to those who participated in ceremonies with her. Mom spent her final years at the Kainai Continuing Care Centre where she acquired many friendships and considered this her home, we would like to take this time to thank the staff at KCC for taking such good care of mom. Her legacy will live on through her teachings and the values which she instilled in her children and grandchildren. A Wake Service will be held at the Senator Gladstone Hall, Blood Reserve on Thursday, March 26th from 7:00 to 11:00 p.m. The Funeral Mass will be held at St. Mary¹s Catholic Church, Blood Reserve on Friday, March 27th at 11:00 a.m. Interment in the Blood Band Cemetery. E-mail your condolences to: legacycardston@gmail.com