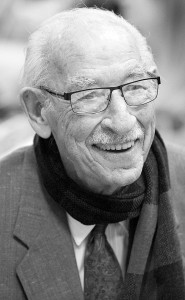 JOHN ALBERT GOGO passed away peacefully on April 4, 2015, at the age of 83 years, surrounded by his loving family. John was born on February 15, 1932, in Toronto, Ontario, to G. Allan and Mamie Gogo. John joined the Canadian Armed Forces in 1949, saw combat in the Korean War and served his country in Germany and Canada. By the time he left the army in 1962, he achieved the rank of sergeant. John was an active member of the Korea War Veterans Association where he was Past-President. Upon retiring from the Canadian Armed Forces, he joined Investors Group. John was active in the community including the Rotary Club and the Canadian Cancer Society. John served as an MLA for Lethbridge West from 1975 – 1993. He was Chairman of AADAC, Deputy Speaker and Deputy Government House Leader and the Minister of Advanced Education. Upon retiring from public life, John created the ‘John Gogo Foundation’ to support numerous community organizations. John was a devoted husband, father, Popa and Great-Popa, and is survived by his wife Joyce, their children, Susan (Tim), Sandra (Doug), Sharon (Bruce), Stephen (Cheryl), Shannon (Ed), grandchildren, Patrick (Lorna) Quinn, Dustin Hegland (Kayla Bablitz), Kadi (Joey) Lavorato, Allison Gillett, Stephany Quinn (Daniel Heimdahl), Haley Hegland (Daniel Labossiere), Tanner (Kalyn) Hegland, Quinn (Michael) Hagel, Joel Gogo, Kenzie (Sean) Dupuis, Brendon Gogo, Daniel (Gabriele) Donkersgoed, Brady Donkersgoed and Hannah Gogo, great-grandchildren, Cole, Dylan, and Reid Lavorato, Riley and Teagen Labossiere, and James Gogo. He is predeceased by his parents, G. Allan and Mamie Gogo, brothers Bobby and Don Gogo, and sisters Bette Campbell and Marilyn Richardson, and is survived by brothers Norman Gogo and Allan Gogo, and sisters Jeanne Allan and Thelma McGillivray who fondly remember him as “Jack”. John is also survived by his sisters-in-law Joan Smith, Fran Senior, Bea Swain and brother-in-law Roy (Louise) Payne. The family would like to express sincere gratitude to staff of The Chinook Regional Hospital and St. Michael’s Palliative Care Centre for their excellent care of Dad and our family and friends for their loving support. In lieu of flowers, the family requests donations to the Salvation Army, the Boys and Girls Club of Lethbridge and Harbour House. A Graveside Service will be held at Mountain View Cemetery in the Field of Honour on Saturday, April 11, 2015 at 12:30 P.M. A Celebration of John’s Life will be held at SOUTHMINSTER UNITED CHURCH – 1011 4th Avenue South on Saturday, April 11, 2015 at 2:00 P.M. with Major Brian Beveridge officiating. Reception to follow in the Southminster United Church Hall.