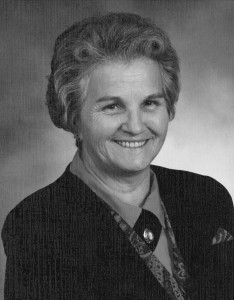 It is with great sadness that the family of Mrs. Lydia Gluszkowski announces her passing on Wednesday, April 8, 2015 at the age of 88 years, beloved wife of the late Mr. Walter Gluszkowski of Lethbridge.

Born in Russia, the late Mrs. Gluszkowski was married to Mr. Walter Gluszkowski on June 14, 1943 and shared 67 wonderful years together. In 1962, Walter and Lydia immigrated to Canada with their children and settled in Barnwell, before making their home in Lethbridge where he has resided until his passing.

Lydia will be deeply missed and lovingly remembered by her three daughters and their husbands, Jadwiga (Marian) Stasinski of Calgary, Christine (Walter) Niznikowski and Eva (Frank) Horvath both of Lethbridge; eleven grandchildren; eleven great grandchildren; three great great grandchildren; a son in law Brian Bruchet, as well as numerous other relatives and dear friends in both Canada and Poland. Lydia was predeceased by her parents, a daughter Zofia Bruchet in 2000, a son John Gluszkowski in 2008.

A Mass of Christian Burial will be held at 11:00 am on Tuesday, April 14, 2015 at ST. BASIL’S ROMAN CATHOLIC CHURCH, 604-13 St. N., Lethbridge, AB, with Father Nathan Siray, celebrant. Interment to follow at Mountain View Cemetery.