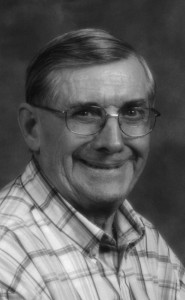 OSCAR FRANK LUDWIG, beloved husband of Kathy Ludwig, of Lethbridge, passed away at the Chinook Regional Hospital on Wednesday, April 8, 2015 at the age of 86 years. Besides his loving wife, he is survived by his children; Dennis Ludwig (Charlene) of Calgary and Karen (Glen) Harrold of Red Deer, his grandchildren; Candice (Al) Halma of Lethbridge, Jason Harrold (Sam) of Blackfalds, Cameron (Cara) Ludwig of Edmonton, Dale Ludwig (Sara) of Calgary, Tyler (Amanda) Harrold of Red Deer, Michael (Jessica) Ludwig of Okotoks, Brad Ludwig of Calgary, as well as his great grandchildren; Caden, Alyssa, Sierra, Maiya, and Aiden. He was predeceased by his grandson Christopher Ludwig. Oscar was very busy and involved with many community groups. He was a life member of the Eagles Club as well as a life member of the Norbridge Senior Centre. He was a member of the Knights of Columbus and 60+ Recreational Club. He was an avid card player, playing crib and bridge with many organizations throughout the city. He enjoyed many days camping with his grandchildren and just spending time with his family. A Prayer Vigil will be held at OUR LADY OF THE ASSUMPTION CATHOLIC CHURCH, 2405-12th Avenue South, Lethbridge, Alberta, on Sunday, April 12th, 2015 at 7:00 P.M. with Deacon Cliff Bogdan officiating. A Funeral Mass will be Celebrated at ST. BASIL’S CATHOLIC CHURCH, 604 – 13th Street North, Lethbridge, Alberta, on Monday, April 13th, 2015 at 10:00 A.M., with Father Kevin Tumback, Celebrant. Cremation to follow Funeral Mass. In memory of Oscar, donations can be made to the All Saints Building Fund, 2405 – 12th Avenue South, Lethbridge, AB, T1K 0P4, St. Michael’s Rehab Centre, 1400 – 9th Avenue South, Lethbridge, AB, T1J 4V5 or a charity of the donor’s choice.