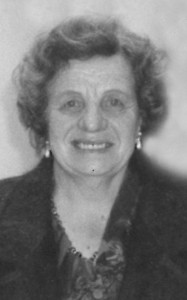 Mrs. Lidia (Tokarski) Selwaniuk of Lethbridge, beloved wife of the late Mr. Jerry Selwaniuk, passed away peacefully at St. Michael’s Health Centre on Thursday, April 9, 2015 at the age of 90 years.

Lidia was born in Brygowszczyna, Poland on February 13, 1925 and then after World War II she immigrated to Canada with her brothers and sisters. In 1949, she went on to marry Joseph Tokarski and together they had two children. After being in Taber for 2 years, she moved to Lethbridge where she remained until her passing.

The highlights of her life were her dedication to her family, her faith, and her service and generosity to others. She also loved to garden, cook and socialize with her many friends. Lidia was a member of the Polish Association, helping with many of their functions for many years. Lidia will be sadly missed by all who knew her.