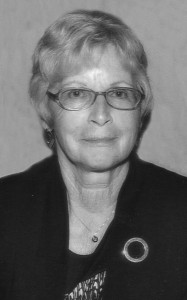 Mrs. Helen Burt of Lethbridge, beloved wife of Mr. Wilson Burt passed away peacefully at home on Tuesday, April 14, 2015 at the age of 76 years.

Helen was born on June 18, 1938 to Eugene and Ida Donovan in Humphreys, New Brunswick. She was raised in Irishtown, New Brunswick and received her schooling in Moncton. In 1956 Helen was employed as an office worker in RCAF Station in Moncton where she met Wilson Burt and they were married on June 1, 1957. While in the service Wilson and Helen travelled all over Europe and Canada, settling in Alberta in 1975. She began her career as an engraver in the Red Deer Area and upon Wilson’s retirement in 1978 they moved to Lethbridge. It wasn’t long after settling in Lethbridge that Helen found work again as an engraver, working locally until her retirement. After retirement Wilson & Helen travelled extensively through the United States, Canada and into the Caribbean.

Besides her parents, she was predeceased by her brothers Gerry Donovan, Leonard Donovan, and George Donovan.

At Helen’s request a private service will be held.

In lieu of flowers, memorial donations may be made to the Jack Ady Cancer Centre, 1A129, 960-19th Sreet South, Lethbridge, Alberta T1J 1W5.