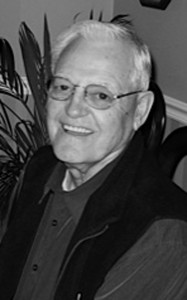 Mr. Ronald Keith, beloved husband of the late Blanche Keith of Lethbridge, passed away at the Chinook Regional Hospital on Tuesday, April 14, 2015 at the age of 88 years.

Ron was the loving father of three children, Kevin (Patricia), Sheryl (Barry) Eccleton, and Brian. Papa was also the proud grandfather of Lauren, Ally, Daniel, Jeff, Nick, and Andrew. He is also survived by three of his fourteen siblings, Lorna, Yvonne, and Grant.

Ron was born and raised near Melville, Saskatchewan. He moved from the family farm to Lethbridge in the early 1950’s where he met and married Blanche Keith, his wife of 53 years. He spent his working career primarily with Loblaw’s and then the Lethbridge Public School Board.

Ron was a people person, and had an amazing sense of humor which always made us laugh. His grandchildren were a big part of his life, and everyone has special memories from family vacations at Christina Lake, B.C. He also loved to tinker in the garage and was known for his ability to repair almost anything.

A private family service of remembrance will be held.

A Celebration of Life will be held at the 3:00pm on Friday, April 17, 2015 at the Royal Canadian Legion General Stewart Branch, 324 Mayor Magrath Drive South, Lethbridge for everyone to attend.

In lieu of flowers, donations in Ron’s name may be made to the Heart and Stroke Foundation, Donations Department, at www.heartandstroke.ab.ca, or P.O. Box 7008, Station Main, London, ON, N5Y 5W7.

One Condolence for “KEITH Ronald”