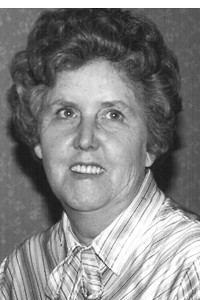 Beloved NAOMI KING NIELSEN BRINKHURST passed away on Tuesday, 21 April, 2015, while residing at the Legacy Lodge in Lethbridge, Alberta. Her long life saw her witness the passing of two husbands. Naomi was born 15 December 1920, in North Sydney, Nova Scotia, the second daughter and third child of Thomas and Elizabeth (Arnold) King. Her Sister, Ruth, and brother, Mansell preceded her in death. She met Ackroyd James (AJ) Nielsen while he was stationed in Nova Scotia during World War II. They were married, 16 October 1940. The marriage was later solemnized in the Cardston Alberta Temple. Naomi and AJ had two children, Elizabeth Nora Warner of South Jordan, Utah, and the late James King Nielsen. AJ passed away on 7 July, 1967. Naomi later married a long time friend, George Brinkhurst, in July 1972. They resided briefly in Calgary, then moved to Cardston where they were active temple workers. Later they moved to Lethbridge, where George died on 31 May, 2001. She is survived by her daughter, Elizabeth (Beth), 5 grandchildren, 15 great grandchildren and 2 great great grandchildren. George¹s two children, Jackie Champion (Edmonton), and Gordon Brinkhurst (Cardston) were important parts of Naomi and George¹s relationship. Special thanks is given to Gordon and his wife, Arlene, for the attentive care they have given Naomi over the past several years. Funeral Services will be held at The Church of Jesus Christ of Latter-Day Saints, Legacy Ward chapel, 2223 6A Avenue North, Lethbridge on Saturday, April 25 at 10:00am . Friends may meet the family from 9:00 to 9:45 prior to the service. Interment to follow in the Hillside Cemetery, Medicine Hat, Alberta. Email condolences to legacycardston@gmail.com. LEGACY FUNERAL HOMES LTD., CARDSTON Assisting the Family. Phone 403-653-3222