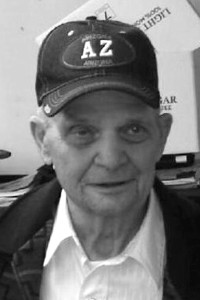 Roy James Harvie, 79, of Great Falls, Montana, passed away peacefully at his residence on Thursday, April 16, 2015 of natural causes. A visitation open to the public will take place on Tuesday, April 21 from 6-8 p.m. in the Rose Room Chapel at Croxford Funeral Home. The funeral service will take place the following day, Wednesday, April 22 at 11:00 a.m. with burial to follow at Highland Cemetery. Roy was born February 4, 1936 in Coutts, Alberta Canada to parents Susan Mary (McKnight) and William Shearer Harvie. He spent much of his youth in St. Kilda, Alberta, where he attended local schools. In 1957, he married Bonnie Roady in Milk River, Alberta Canada. Roy was a man of all trades: from owning a car lot, on the road as a trucker, a custom cutter, farming, even operating a garage with an attached café. Roy enjoyed the outdoors, whether it was working in his garden, or out fishing and camping. He was an avid bowler who enjoyed working on his cars, sharing a funny joke; but most especially he enjoyed spending time with his children, grandchildren and great grandchildren. Survivors include his daughter, Debbie Norris; sons, Wes, Ronnie (Jodie) and Marty (Jean); sister, Agnes Pocza; brother, Robert; 13 grandchildren and 6 great- grandchildren. Those who have preceded Roy in death include his parents; beloved wife Bonnie; sons, Ricky and Bobby; brothers, John and Willy; and grandson Spencer Harvie.

shared with the family at